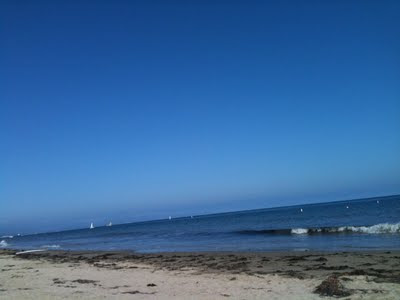 I seem to find it impossible to appreciate my life without taking a trip somewhere to look at it from a distance. Yes, I know I went to India late last year and should be over it, but I'm not (in fact, I'm plotting my return, but that's another topic altogether). While I haven't been crossing international borders of late, I've definitely been casing the US West Coast in a combo-plate tour of gigs and friends houses and various Ashtanga studios along the way. I saw characters from various chapters of my life that span a couple of decades (friends who'd actually met my parents and/or been to my long-ago wedding) and spent time with people that are very much a part of the here and now.
I think part of this penchant for real-time, real-life life-mapping is a reaction to all the time spent online. Remember when you read the newspaper instead of blogs or Tweets? Or called someone instead of texting or DMing? Weird, huh? Anyhow, per usual, I closed out the latest trip with some time on the beaches of Southern California. I walked up and over a hill from my friend's beach cottage and onto the sand, appreciating the clear view only the shore can provide.
I hadn't consciously planned it to coincide with the trip, but this past week, I realized, marked a decade since my dad died.
My father's passing was — as anyone who has lost a parent knows — perhaps my real entry into adulthood. While I was relatively young to lose a parent, I wasn't a child: I'd been married (a relatively young act as well) and divorced by that time, and I'd had my first real go at a career. But there was really nothing comparable to his death. This was a real, irrevocable loss. His death marked a sea change.
Because we don't really know what something or someone is to us until they're out of the picture, I learned more about my relationships—to him, to my siblings, to everyone—on the day he died than any amount of therapy or reading or astrology or numerology could purport to reveal. I don't know that this has made me a 'better' person. And I can assure you not every choice I've made since has been wise, but I do see how with that understanding—of death, of impermanence, of how I related (or didn't) to others—I was much freer to make many choices than I would have done otherwise.
Soonafter he died, I set about unwinding a compass that had been set more based on his influence (not all bad, mind you) than my own instinct. This would mean several years without really having a clear compass! (Again, an understanding that comes only with hindsight) But in the weeks and months after he died, I bought a guitar and began to own my own songs...and I  flew to New York to study yoga with a master yoga teacher whose instruction I use as a guide each day.
A lot has happened in 10 years—including more loss, more gain, and more lessons of all stripe— and I can't really say what it all means...which likely only means there's more to come! Here's to the next chapters....