The best way up Chamundi Hill is to walk the steps: 1,180 hundred rough-hewn stone steps that lead the way to the great temple for the patron (& very fierce) goddess of Mysore, Chamundeshwari, on top of the 1000 meter hill that rises over the city. Behind the Chamundaswari temple is another, less populated Shiva temple. Six hundred steps down the hill from Chamundaswari is a Nandi bull sculpture and the Shiva Cave Temple. The hill has a rich history and is a place of pilgrimage for Shiva and Chamundeshwari devotees alike as well as tourists. 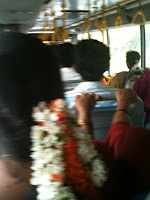 A special and much loved by yoga students Swamiji has manned the Shiva Cave Temple for well over a decade. Yoga students and teachers who traveled to Mysore long before I came here led me to both the Ashtanga Institute and the Shiva Cave Temple. My first yoga teacher knew Swamiji quite well. He played tapes of Swamiji chanting during our class, so I knew the voice before I met the man. Slight, barefoot and with long hair and a graying beard, Swamiji has the jolly, seen-it-all demeanor of Santa Claus. Many many people come to his Cave, to pay homage to Shiva and often seek guidance from Swamiji.  I instantly feel elevated in his presence and make it a point to go see him when I’m here, if just to talk about the news or whose winning the cricket game as much as any weighty spiritual concerns of the moment.

And of course Chamundi Hill, is …Chamundi Hill. Rising over the city, the top is a hive of industry catered to tourests and devotees alike. Vendors sell flowers, sculptures, prayer bracelets, stuffed animals, coconuts, food…you name it. As with most attractions, a definite element of spiritual theme park has gone up in the shadow of the beautiful temple.
While I've walked up Chamundi hill on several occasions, that generally takes a bit of planning. The most comfortable (and expensive) way to get up Chamundi is to drive or to get a ride from a friend.
When it comes to transportation in India, I am a wimp. I do not drive. I do not rent a motorcycle or a scooter. I walk. I take rickshaws. Sometimes I ride on the back of a friend's scooter or motorcycle. Very occasionally, I hire a driver for a longer trip. Yesterday, a wise friend introduced to the local bus.
Bus #201, which takes passengers from downtown Mysore to the top of Chamundi hill, was air-conditioned and had speakers blaring songs to the goddess. Instead of haggling with a rickshaw driver over the faire, we handed a buss attendant 25 rupees for two and sat back in cushioned seats. We were the only Westerners on the bus. In front of me, a woman with jasmine in her hair sat with her school age son.  The road is windy up Chamundi hill, and as it corkscrews up the mountain, a vista opens up of the city of Mysore and beyond. The bus was modern but the roads are still all-India: I had to talk myself out of feeling scared as we rounded sharp corners to see oncoming scooters, tour buses, monkeys and the occasional pedestrian.

Swamiji wasn’t at the Cave Temple, the space instead staffed by a younger sadhu in a white dhoti and beads. The young sadhu nodded to us, gave us prasad and continued chanting a low prayer to Shiva. He appeared to be counting as he touched his thumb to each finger as he chanted. I asked him if Swamiji was around and he said he’d gone to Mangalore. Then he offered us tea. 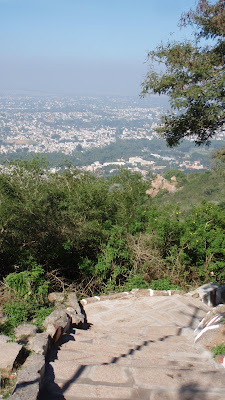 During my first visit to India, I’d sit in the back of the cave with a friend who spent many hours in service to the business of the Cave Temple while Swami did the morning pujas. Each day he chanted 45 minutes of prayers while cleaning the figurines and sculptures that formed the altar. I recognized some of the chants from the long-ago tapes played by my yoga teacher. The space feels divinated from the continual stream of prayer.


The young sadhu disappeared for a few minutes and returned with small tin cups of sweet creamy chai. We sat sipping our tea, watching other devotees bend down to walk through the low entrance to the cave, bow to the Shiva altar then touch their fingers to the red powder and mark their forehead.  The sadhu nodded, doled out more prasad, his prayers never stopping.
Eventually, we finished our tea, thanked the sadhu and walked outside to wait for the bus. We'd be back.
Posted by Bird in the Tree at 7:05 PM