Eating with my hands 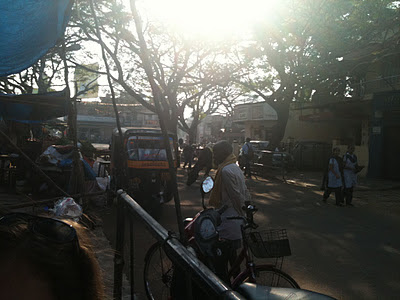 I like eating with my hands. It's one of my favorite things about visiting India, this fork-free (unless you must ask), chop-stick-less way of consuming food. It's efficient, and primal and sensual and nourishing all at once. The rims of stainless steel Indian dinner plates are ideal for providing leverage to fingers and thumbs, bits of chapati or roti. And what would a thali meal served on a banana leaf be if you took a fork to it? Anyhow, I was thinking this, Friday morning, while eating my 'last' breakfast of my trip at the 'Secret Breakfast Place.' I wasn't the only one among the party of 11 who convened for breakfast @ SBP who was to leave Mysore soon, so a high standard of Indian breakfast was on order.
A KPJ student discovered SBP's stellar idli several years back and word-of-mouth has led ever-widening groups of yoga students to the place. This is saying a lot as SBP is an out-of-the way tarp-covered shack on a side street in Lakshmipuram and while not so 'secret' anymore, you still need a friend to take you there the first time.
Friday's party filled the two benches and two stools placed on the sidewalk to serve as a dining room. The seen-it-all proprietor took our orders with ease and quickly handed metal plates our way filled with idli and dosa, beet-root sambar and coconut chutney while a cook filled tins with idli batter and loaded trays in and out of a metal steamer. They served other customers who stood or crouched to eat, and handed some of us seconds. There would be no written bill: when we were finished, he told us how much, err, little, we owed (it would be a little over $5 for nearly a dozen people).
Sixteen hours later, I got back to forks (and Western prices) in the Bangalore airport. I'd taken a taxi up with a friend, who would also be leaving India, albeit due to a family emergency. I was glad to share the four-hour ride: exiting Mysore can feel abrupt and in need of a bit of processing even without adding last-minute changes and familial concern to your schedule.
Post-SBP, the day had been peppered with multiple good-byes made over multiple sweet glasses of chai.  So I was plenty awake for the drive.
Given the highway improvements over recent years, the ride is faster and smoother for long stretches of pavement but still has lane-less traffic, bumpy dirt shoulders which are avidly used by cars and moped seeking passage and abrupt speed bumps. It always feels like a miracle to arrive at the Bangalore airport safely. Nonetheless, we did, and on time, for our respective flights.
Likewise, it always feels like a miracle to enter a plane and exit in a different country. My first flight took me to France. I sat by an Indian woman who was on her first trip to the US and I managed to sleep unassisted. At Charles De Gaulle Airport, there was just enough time to grab juice, cappuccino and send an email to home to say I was safe and get to the correct gate. Another 10+ hours and the plane came in for a landing over the San Francisco Bay, which was in ideal, sunlit and sparkly form.
I'm so happy to be here. At the same time I'm going through some India x US culture-shock. How to not compartmentalize my experience? In India, I feel so American. In America, will I be able to hold onto the awareness and sense of community and culture so present to my experience of India? Taking measures toward some sense of integration, we popped by Ashtanga Yoga Berkeley's new-space celebration to deliver a bronze dancing Shiva on the way home from the airport. And I packed a couple large thali plates in my suitcase for use at home. It's not that I really make idli or dosa. Nor do I make that much traditional Indian food in general. This has not stopped me from eating my first home-cooked-meal in the US with my hands. Thank you Mysore. Hello California.
Posted by Bird in the Tree at 11:28 AM

Oh, justdeleted my previous comment I guess I read as if it was a new place but now I see it is not, you just say it is a secret place... wonder if it is the one I am thinking about, one with three letters...

Anyhow, as I said before hope you are enjoying being back home in sunny California :-)

Glad you're home safely.... thought of you when Kelly and I went to the lake and saw the storks!

I seem to have moved back into a happy phase for the final third :)

@ Claudia: not sure, but I'm sworn to secrecty re: SBP...plus I really don't know it's acutal name!!!...Thanks Karen! It's weird being back and good...@ Susananda! Glad you got to the lake. Glad you're happy...and posting again, too :) Enjoy your time.