India is big on holidays. Even Christmas gets a nod between all the Hindu celebrations. But signs of Chinese New Year were scarce to my eye. Nonetheless, the Mysore Ashtanga community counted among it enough people used to celebrating the end of the winter season on the Chinese calendar, and they weren't about to let the New, Year of the Dragon, go unobserved. Chinese New Year's Eve, I soon learned, is traditionally a time of families gathering to feast. So a large contingent of the Mysore Ashtanga tribe were orchestrated by one of its consummate hostesses in gathering together the ingredients for a traditional Year of the Dragon shindig, conveniently, on the eve of our Moon Day holiday.  I shopped for lanterns (albeit more Indian than Chinese) and red and gold decorations; another student found a large block of fireworks while another group of folks exercised their culinary talents. 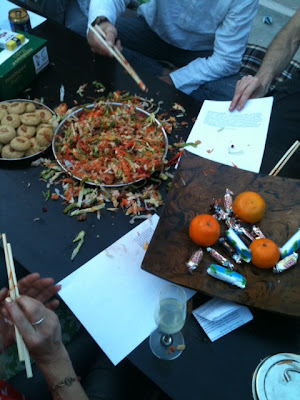 One of them, Sam, a professional pastry chef when he's not busy traveling the world or studying yoga in Mysore, was enlisted to bring the desserts.  I'd asked Sam for some professional advise on pies and tarts when I was first clued into his skills at one of his periodic bake sales here. Given the task of baking for the New Year's party, I subsequently spent Sunday afternoon as his apprentice making Chinese almond cookies. Plus, he gave me a bonus lesson in frangipane. By default, I picked up some tips on measuring by weight rather than cups and teaspoons.
"This is simple," Sam said as he placed ingredients into the wet-dry blender. "Only four ingredients, and everything is 100 grams." Eggs are about 50 grams each, so that's two," he said, placing the eggs aside a moment to expertly grind 100 grams of almonds. A moment later,  he whirred the flour, sugar, almonds and eggs together together and, voila, we had frangipane cream. A pate brisee was already chilling in the refrigerator. 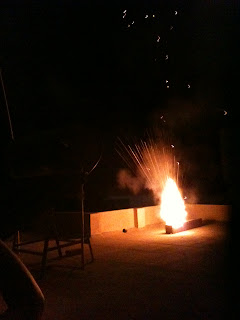 Another benefit of spending time with the other yoga students who find their way to Mysore is discovering the high level of talent lurking behind the asana practice. What's wonderful is how people may scale down their lives as chefs, dancers, filmmakers, art directors and musicians to be here for a few months, but still dazzle everyone else when they share those talents.
As such, Sam wasn't planning to do any baking in India. But after helping with a bake-sale fundraiser for Odanadi, and realizing he could buy a small convection oven for his kitchen, his bake sales, a cut far above regular bake sale quality, became a semi-regular event. Now he has a hard time keeping his schedule open as other yogis request birthday cakes, raw pies and spreads for special occasions. People he hasn't met stop him to ask him whether he can make him something. He's become expert on finding hard-to-find ingredients in Mysore as well as getting the most out of a small kitchen.
While the pate brisee baked, we walked down to three different fruit stands searching for pears to complete a frangipane tart (there are no pears, but we find some nice Gala apples). Back in the kitchen, we pressed almonds into cookie dough while the tart baked. 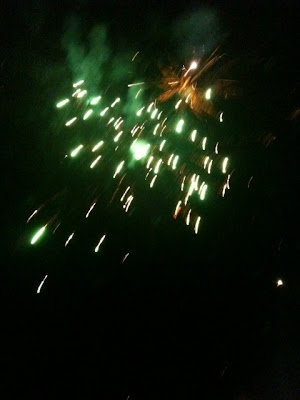 Later, at the roof-top party, the almond cookies were served (and consumed quite quickly) alongside a special "prosperity toss' salad made by two other talented yoginis. After everyone read their Chinese Horoscopes for the year and munched through a bountiful spread of more salads, soups, momos and home-made sushi, we clambered up to the roof for a fireworks display that was as beautiful as it was scary. Fireworks in India are no joke! The bigger louder and brighter the better — and seemingly anyone can buy a huge display. Let's just say the Dragon seriously roared. Happy New Year!
Posted by Bird in the Tree at 12:30 AM