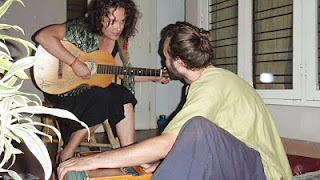 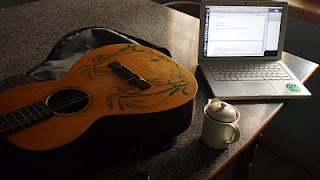 From the get-go, I've been looking at this trip to India as an arts residency of sorts, to recharge my creative batteries as much as reboot my yoga practice. I felt the itch to write something new before I left, though I wasn't certain what that would be. But I figured if I fed my muse with Carnatic lessons, the somewhat random confluence of other musician-yogis here, a regular writing practice group, as well as coconuts, papaya and thali, and all-important kick-ass Ashtanga yoga, something would happen. On my last trip, I formed a little band with a couple of others and had an idea to do the same this go. Two and half months in, no real band has come together and I've missed my musical compatriots in the states dearly..... That said, musical events and inspiration are and have happened that simply wouldn't have occurred anywhere else.
My first month, I was happy to be introduced to an American tabla student, Chris, who'd attended Berklee before moving to Asia to teach English. I was psyched as our Western musical tastes were similar (Townes Van Zandt, Gillian Welch, etc), which seemed highly unlikely given our locale. Plus, he liked to practice. Unfortunately (for me), Chris and his lovely wife moved onto Thailand before we had time to perform. Concurrent with this, I met Bo, a Western Classical singer with amazing pipes. After we sang at Santosha on Christmas, a plan was hatched for a shared bill/benefit performance. While I was prepared to play solo, I wasn't so jazzed about it. The same week, however; Alex, a teacher with an artistic sensibility and a great space for events, hosted a jam where I met both a traveling session guitarist from New York and a piano player who was learning harmonium. The guitarist was fabulous....and also traveling through rather than staying. Nonetheless, I was pleased to find the new harmonium player, coming from piano, had a natural ear for accompaniment. He learned a handful of my songs and ended up performing with me at the benefit show. I should state, that (gasp) I haven't been real big fan of harmonium. Sure, I appreciate kirtan but I hadn't heard harmonium played in a context that I thought might apply to the type of songs I do. Anyhow, long story short, I have a new appreciation for its ability to be mournfully vocal and Old-World gypsy as much as its Eastern devotional self.
As we readied for the show, where we were each to do a set of our regular shtick, Bo thought it might be fun to do a song together. Mind you, Bo is a singer's singer. She teaches. She performs opera. I was a little intimidated, but she picked out a tune from a Broadway musical 'Chess,' and we recruited Classical guitarist Adriaan to back us (on my little, tune-wonky parlor guitar). We rehearsed daily for a week, me sweating bullets most of the time. And we'd eventually close out the evening with the song, that was a stretch on my end, but did please the crowd.
As happens in Mysore, people are continually coming and going but the musical influence remains unabated if the faces change quickly. I've played with a Spanish guitarist fluent in covers and have recently met a Finnish guitarist whose into Dylan. Another teacher and bodyworker here with a dual career as a rock singer has a wealth of road stories. The owner of Santosha flags me down when I come in now to recommend music I might like. One week, a yoga and flute student friend brought me to her teacher's house to listen in on a lesson. Midway through the lesson, a professional tabla player arrived at the house to jam with the bansuri master. Chai was made and music commenced on the living room floor...and I got so excited about what I heard I asked Alex to host a performance of these pros, which resulted in a lovely evening of North Indian ragas on sarod, bansuri & tabla.
Meanwhile, Bo and the harmonium player have left town and I've been back to the woodshed and through line of Carnatic singing lessons, self (music) practice and writing.
I still can't really tell you what exactly the result of all this input is. My muse is at once being true to form — the other thing about Mysore is that it doesn't really change you as much as make you that much more yourself — and perhaps taking some new turns. Most of what I've written is still in the pretty new, raw and shiny stage where I'm not sure if it should go out of the house ...although since I've been doing a lot of my practicing on the rooftop, some of it invariably gets mixed into the Mysore sound scape of rickshaws, hammers, fruit vendors, chipmunks (they're super loud here), cows, et. al.
Posted by Bird in the Tree at 7:02 PM

Deborah, this is so inspirational to read. I can imagine this journey will continue to rouse your creative muse again and again for many moons to come. Thank you for giving us readers a glimpse into your life and your art in Mysore.