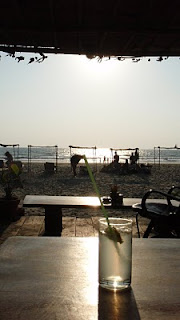 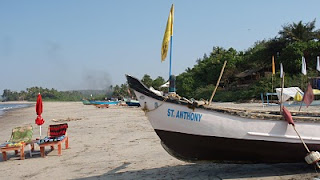 I didn’t get through one full book while I was in Mysore. Save for brief consultations with Yoga Mala and an evening reading selections from a borrowed copy of a David Sedaris collection, I was generally too busy eating or sleeping when I wasn’t taking classes or lessons or going to rehearsal.

In Goa, I’ve read two and half books in as many days.

At Rock and Raaga, the music and bookstore in a little shopping complex of internet cafes, fruit stands and supermarkets along the main street in Candolim, Mark Knopfler is playing on the overhead when I walk inside on my first day to peruse the stacks. After I find a collection of short stories by Amy Bloom amid a collection of mysteries, romances, travel guides and other more literary titles… I really know I’m not in Mysore anymore.

The next day, I leave the finished book on a stack of paperbacks sitting on the banister of bungalow adjacent to the one I’m occupying for my time in Goa…and select an English language title for the next bout of reading.

I reserved the bungalow months ago on the recommendation of a friend as much as for its proximity to Rolf and Marci's Ashtanga studio as anything else. I wasn’t quite sure what constituted a bungalow before I arrived in Goa after three months of Mysore’s decidedly more urban, and Indian, environment.

“A one-bedroom in the suburbs,” opined my American friend when I mulled the possibilities. I’d envisioned a thatched roof British-esque cottage suitable for a Hobbit with a door smack in the middle of its squat shape. What I found was a single-bedroom studio apartment with a bathroom, a kitchen sink, single-burner stove and half-sized refrigerator, with a front porch overlooking a small garden in a building containing 3-4 such dwellings. The landlord, a cheerful Indian woman with a Portuguese name and an equally amiable husband lives next door and other yoga students, at least two from France, occupy the rest of the apartments. In the late afternoon, I smell the landlord’s Indian cooking, the neighbor’s child runs through the yard with some local children while one of my upstairs neighbor runs through basic guitar chords.

My practice time here is exactly three hours later than my 4:30 a.m. Mysore call, so mornings are downright luxurious. I wake without an alarm clock, make tea, listen to music and then walk five minutes along a dirt trail, past a big Banyan tree, along a green dividing wall and through an empty lot to practice in a yoga studio that could be described as a jungle hut. Still, Rolf and Marci’s shala is a traditional Ashtanga establishment, and many students who were or who are going to Mysore to practice at the main studio, stop here before or after for an opportunity to practice with these senior teachers. That is the room is full, the students serious, the teaching as good as it comes.

The first practitioners start at 5a.m. I’m uncertain as to how many students are here practicing at once. Like Mysore we all have designated start times, and there’s a wait on bamboo mats set outside the shala entrance under the palm trees to be called in. And like Sharath and Guruji before him (by whom Rolf was certified to teach) the signal when a spot opens up for you to start your practice is “one more.”

Inside, there are no glass windows, the dirt (or dung?) floor is covered with more bamboo mats, and a stray mosquito is bound to get you, but the tone is at once devoted, casual, open and correctional. Unbalanced sides, weak legs, twisted spines, and other over- or under- compensations for getting into poses are called out matter of factly by both teachers, often across the room.

Sharath told me to work on my backbends when I asked him for some feedback before I left, but ‘otherwise, the rest is fine.’ Granted making your backbends ‘better’ is no small order, I came to the right place to do such work. Whereas Sharath left it for me to figure making it better out, here I’m offered an assessment of what’s not doing an adequate job and a prescription for addressing the problem and strengthening the necessary muscles: a few modified positions involving straps and blocks. Now Ashtanga Yoga as taught by Pattabhi Jois is traditionally, very much adverse to props. Marci is quick to say ‘if you’d like to do this while you’re here...’ when giving me my options, as the studio and most practitioners here are otherwise extremely committed to the Jois lineage. While the postures are not exactly easy—the are indeed work on my backbends— and I readily sign on.

Finishing postures are practiced in the middle of the studio or outside as space allows. My first day, I closed my practice on another set of bamboo mats behind the studio along with four other students. I was reminded of the spices and chilies commonly seen drying on mats outside Indian homes, but I liked seeing palm trees and coconuts beyond my toenails while in shoulder stand.

Meanwhile, the rest of Candolim is hardly all about yoga. San Franciscan’s might picture a patch of forest between Fisherman’s Wharf and North Beach to get an idea of what lies 5 minutes beyond the studio in both directions. Albeit, the streets are much narrower here than in California, and beach shacks, not wharves, line the shore of the wind-whipped Arabian Sea. It’s not a fierce wind, though steady, and does nothing to deter vacationers from Germany, Russia, American, the UK as well as the random yogi, local or expat. An expanse of sun chairs and beach shacks serving everything from Goan Curry, fresh fruit and lime soda to Continental Breakfast, Kingfisher Beer and hard liquor make it easy to while away morning, afternoon and evening as one sees fit, reading, sleeping, eating and otherwise recovering from the worries of the world.

It’s not uncommon to have my route to the beach obstructed by a great bull or crossed by a small pack of wildish boars. But it’s never hard to find a slightly different route to the sand, where shore-crawling vendors hawk sarongs, videos and carefully balanced stacks of more paperback novels between the chairs for when one gets through another book....

The real comfort of travel is given by small little things not by luxurious things.. Birding Resorts near Delhi and Jungle Resort in India

I am very interested to learn more and more about yoga courses in goa. Your site is very much helpful to give us latest information on yoga teacher training goa 2016.