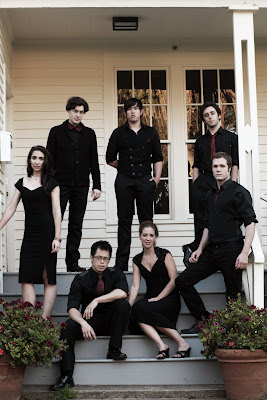 It's rare that a fully realized orchestral indie rock project hits the scene and with the release of its debut EP 'Songs from the Valley Below' in early 2010 The Family Crest quickly ignited a buzz in the Bay Area. Employing strings, flute and horns as well as drums and guitars, the band has an incredibly full and dynamic sound that attracts lovers of musicality and a great show (as well as comparisons to Arcade Fire). Led by musician and songwriter Liam McCormick the project is notable for its dedication to collaboration and inclusivity: while a group of 7 musicians form the core of the Family Crest, McCormick is dedicated to bringing new players into the mix as the spirit of the music dictates: anyone who makes an artistic contribution to the project becomes a member of the "Family." On the heals of recording its full-length Cd "The Village" to be celebrated on January 22 at Cafe Du Nord, McCormick discussed the formation and process of the band.

Q: How did you start playing together? Where were the seeds of the collaboration born among your core group & how does one qualify as a Family member?
Liam McCormick: The band actually grew out of a recording project that started in 2008. By that time, I had spent several years writing music and playing with bands, but was aching to record some personal material that I felt excited about. I also wanted to record in a way that sidestepped the traditional recording process and brought many different people into the musical experience. I love the feeling of playing with new musicians, and my favorite artists always change their sets by bringing friends or other musicians into their shows…collaborating with new people always brings fresh energy. I wanted the recording process to capture that spirit.
Once I decided to start recording, John (Seeterlin) and I did some research on recording, bought gear and posted flyers at music schools, advertising for musicians who were interested in recording just for the love of making music. We had no idea whether it would work, but within two weeks a bunch of students got in touch and become our first Family members. “Joining the Family” is as simple as that: if you collaborate with us on any musical or artistic level (recording in a bar choir, doing a photo shoot, creating a music video, playing violin at a show, etc.) you become a Family member.
The recording project quickly snowballed, and we soon realized that people wanted to hear us as a live act. We reached out to some of our primary recording musicians – Owen Sutter (violin), Mike Rocha (Trumpet), Pat Elliot (Drums), and from them found Nicole Calhoun (Cello) and Sarah Dabby (Viola and Opera Vocals), and formed the band. Since then, Mike, Pat, and Nicole have left to pursue other interests, but we’ve been incredibly fortunate to have Laura Bergmann (Flute, Percussion and Vocals), Jacob Steuer (Drums), and Lucas Chen (Cello) join us. We’ve worked with a lot of talented artists up to this point, and hope things continue that way.

Q: You're rooted in collaboration but can you describe how you write & develop material? How do you manage bringing your respective ideas for songs to the table?
LM: I’ll write a bunch of songs, and over time, the ones that I'm really excited about slowly dwindle down to 20 or so that I think will work best for the vibe of this group, and then I do the orchestrations. Once I have all of the material written out, Owen, Laura and I will work with the arrangements and do any extra writing [that is] needed. After that it goes through an endless loop of revisions, additions, and rearrangement. Given how our band functions, that process never ends.
That last part is where the collaboration begins. Sometimes when I’m playing with different musicians, their random fiddling will spark an idea, and then I’ll write a new melodic line on the spot and ask them to try it out. When I’m in the recording studio, I’m constantly working with players and adding layers to the music to make it richer. Meanwhile, if a musician has an idea, if they think an arrangement doesn’t work well, or if they want to try something in a different style, they’ll share their thoughts and we’ll explore those perspectives. This exchange is really important, because all of our shows are different in terms of instrumentation and personnel, and sometimes it takes a few different ideas and some experimentation to make everything work.
We never get bored, to say the least. Q: Who do you count as your major influences & who else are you listening to now?
LM: I grew up listening to a lot of jazz, classic rock, 90's R&B, and pop. I really like musicians that take me somewhere: Teitur, Anna Ternheim, St. Vincent, Arcade Fire, Coldplay, Badly Drawn Boy, The Beatles, Feist, Kings of Convenience, The Decemberists, George Winston, Vince Guaraldi, Damien Rice, Cursive, Glen Hasgard, Elliot Smith, Hauschka, Oh Laura, Rufus Wainright, Sean Lennon, Steely Dan, Miles Davis, Fleetwood Mac…Debussy. I have a pretty eclectic taste. Yesterday I was listening to Nine Inch Nails and Coldplay, and now I have Miles Davis in the player. It's hard for me to sight just a few influences; so much has influenced my writing, and continues to influence it.
The cool thing is that everyone in the band has equally eclectic musical tastes. Since a lot of the musicians in the group are classically trained, there’s a lot of Beethoven, Shostakovich, and Brahms floating around. Flip a switch and you’ll get Zakir Hussain, The Weepies, Marvin Gaye, Stevie Wonder, Herbie Mann, Idan Raichel, Josh Ritter, Wilco, Muse, The Supremes, The Jackson 5, Queen, Mahler, Simon and Garfunkel, Ace of Base, Bjork, Ladysmith Black Mambazo, Mumford and Sons, Astor Piazzolla — you name it.

Q: You've a new Cd being released soon. Can you discuss your recording experience (where, who produced & mixed) and what you were aiming for with this collection?
LM: We recorded the majority of the record ourselves and produced it ourselves. When the project started, John, a good friend Cecil, and I researched and bought recording gear. We then sought out spaces with good acoustics and started recording.
A lot of The Village was recorded in a 150-year-old church in a little town called Jackson close to my hometown. I have really fond memories of recording vocals by candlelight— the lights buzzed, so we couldn’t keep them on—and sans heat in the freezing December: the heater was also too loud for recording. At the time, it was really strenuous, as we were pulling sessions off from about 6PM to 4AM, but it was an amazing time of discovery. We did the piano tracking in a little wood cabin in the snow – in fact, if you listen to 'Backwards and Forwards' very closely, you can hear the sound of a fireplace in the background. We recorded in living rooms, garages, classrooms, kitchens, and restrooms. We recorded about 30 people singing, screaming and clapping at Café Royale in the Tenderloin, and another 40 at Bazaar Café in the Outer Richmond. Our only studio time occurred at Different Fur Studios in San Francisco, and the Hangar in Sacramento, to track drums and bass. After nearly two years of recording, we went to Tiny Telephone Studios in San Francisco, where mixing engineer Jay Pellicci spent hours poring over our music to capture the essence of our music. And to cover the expense of mixing, mastering, and printing, we launched a fundraising campaign on Kickstarter.com, where over 140 donors stepped up and donated over $13,000.
The Village was written over a two-month trip through Europe at the end of a long relationship. Paris was particularly inspirational for me, and my experiences there influenced a lot of the record. As cliche as it may sound, being in Paris, moving around a completely foreign city and thinking such weighty thoughts was a good starting point for the creative process that resulted in The Village. I suppose, like many other records, The Village served as a therapeutic outlet for me.
Our biggest goal for this record (aside from completing it) was to make a statement about the music-making process; to say that we, as artists, could collaborate with who we wanted, and decide how we wanted our music to be made.

Q: You've quickly become Bay Area favorites and a lot of folks are anticipating the Release Party at Du Nord—What can listeners expect at the show? And will you be touring in support of the CD after is release?
LM: Be prepared to sing and scream, and for a lot of musical surprises along the way. We believe in giving people an arena show experience no matter where we play, and our Café Du Nord show will be no exception. We’re really excited about it.

We’re planning on touring, hopefully sooner rather than later, but we haven’t sorted out the details yet. It’s definitely one of our biggest goals, as we want to bring this music to people, and more importantly, give more people the opportunity to join The Family.