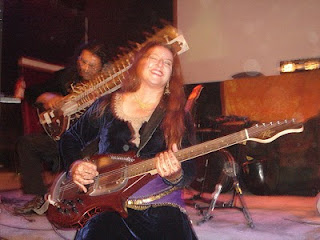 “And the day came when the risk it took to remain in the bud was more painful than the risk it took to blossom.” - Anais Nin
Fontain Riddle has been a fixture in the Bay Area music landscape since she first moved here from Washington, D.C. Whether she's hosting Diva Radio for KUSF, recording new material, blending jazz-inspired vocals, raga and instrumentation from the East and the West to create Sufi-inspried dancescapes, she's a tireless servant to the muse in both band name and spirit. This week, Fontain's M.U.S.E is part of a Valentine-fueled evening of music and ritual called "The Night of Dead Roses." Fontain gave us the low-down:
DC Tell us about the big show you're doing "Night of Dead Roses" on February 13? What can we expect from Fontain and the night?
FR The event is at the Broadway Studios in San Francisco, at Broadway and Montgomery, 7pm.
Night of the Dead Roses is a "...a tribute to the good memories and wisdom gifted to us from past lovers...a night dedicated to forgiveness, healing, and moving on to create new love on Valentine's Day and in our futures...." It is a collaboration and concept by Patric Tierney, who has invented several provocative social /romance games. He will be giving a guided tour of these on that night, and there will be aerial dancers, music, and an independent film maker Nara Denning is presenting Short Films called "Neurotique." You can expect magic, romance, passionate vocals in many tongues, some rocking raga and hot eastern grooves to dance to from Fontain's M.U.S.E. People who like to dance usually lose a few pounds at our shows. I know I do.
My brother is a well known Bay Area Magician, Majinga. He and Illusionist Genii Perry have designed a magical presentation choreographed to our music and in keeping with the theme of Night of the Dead Roses. I have been working with both of them creatively for ten years with the Magique Bazaar. We will have our Indian percussion master MP Singh with us as well as [my husband] Farhan Khan on the Sitar. And, it is Farhan and Fontain's 11th year wedding anniversary on February 13th. So I will be in rare form in appreciation of all the blessings I have been given. Lets just say I will be CELEBRATING.


DC You've incorporated many different influences into your work, from jazz to East Indian music and have played with bands and solo? What's most interesting to you now?
FR Sleep, I never get any. Well, I am not really a deep person, so I am interested in whatever makes people dance. Actually, I am working on two more CDs simultaneously. One is instrumental, a yoga album for yogis who like to dance and not think about the lyrics. I get to show off some soloing on my electric sitar and Farhan can show off a little with his acoustic sitar. The other is a set of all-new songs with socially critical themes. I use to be a very, very angry person and I would do some crazy physical things when I was mad—like jump off a pier where people were fishing and sharks swam, etc. I do not dare do this now because I have a child. I have chilled out quite a bit since then. I am really interested in how to inspire my son to be a better person than I am and to not go through life angry. This stuff is interesting to me now. I am sure some more songs will come from that process.
Jazz. I have always loved scat singing, Ella of course. I have learned a little bit of several languages so that I can form new sounds so that my scatting sounds fresh. A little French, Arabic, Hindi, Spanish... I actually sing a song in Uzbec. I've had several of my songs translated in these languages and we do them live. I like to change it up and I like to reach a wide variety of people. It usually surprises them when I start singing in different languages.


DC Who do you look to as mentors? Do you have any main teachers
FR Hazerat Inayet Khan is my greatest teacher. I found out about him from a compilation of his teachings called 'Music of the Spheres, the Sufi Way.' Hazerat Inayet Khan was a Sitar player, and a Vina Player. In his time he was one of the greatest. He gave it up to become a spiritual teacher. I highly recommend his work if anyone out there in cyberspace is interested in Eastern Philosophy. Another Sufi I have learned from is Rumi of course. Musically, nature is the best teacher. The Goddess Saraswati is an icon who can still teach us. She is the mother of music, dance, and knowledge. I look to her for inspiration.

DC Is there a story behind your name?
FR My name is a common French name meaning 'fountain.' And most people confuse my name with Fountain. I really do not care if people confuse my name. I just laugh, some times they conjugate it as if it is a verb. Fontanna, Fontuna, Fontina,... I think Fontina is a kind of cheese.
Riddle is my fathers last name. I never changed my name when I got married because my Dad died young. It is no mistake that the main character in Les Miserable was called Fontaine (the correct spelling), a person can associate the name with "fountain of tears" or some such metaphor. But believe me, I am the fountain of LOVE, yea baby! Le Fontaine du amour.

Night of the Dead Roses has been Canceled>>>
Sorry to say the very inspiring event was canceled due to fire permit violations on the part of the venue Broadway Studios. bummer! The good news is the promoter wants to work with us in the future perhaps a St. Patrick's Day event since his name is Patrick at another interesting venue. An absinthe brewery perhaps, stay tuned.

See you all at the BrainWash in San Francisco on March 7th, 7pm where Fontain's M.U.S.E. will do a 1/2 hour set.
www.fontainsmuse.com for details