I first met Linda Ruggiero on my last trip Mysore, where we'd both traveled to study at the Ashtanga Yoga Research Institute and do some volunteer work for Operation Shanti. I soon found that Linda had a lot going on beyond her yoga practice. A PhD in biology, and an accomplished ceramicist with a love of knitting, she was a clear creative force! I've kept up with her on trips to New York, where she now lives, creates and practices. Shortly after she exhibited some of her work at Mugi Pottery, I asked her about life as a scientist and artisan.
Q: I love that you are both a scientist and an artist. Which came first? How do you find the disciplines complement one another?
LR: To be honest, I'm not sure which came first! I have always loved both — but I guess I started to see the connection while I was working in a cell biology lab at the University of Pennsylvania. I enrolled in post-baccalaureate classes in Fine 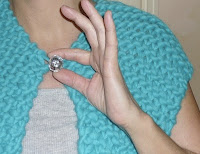 Arts, with an emphasis on ceramics. Through my scientific research and the art I was producing, I became aware that there was an intimate connection between science and art. I was particularly intrigued by the ability of the visual system to process information about color, contrast and light in such a way that a complex image was formed within the brain. The steps beyond that processing — how the brain was able to associate this image with a particular emotion -was an extremely fascinating problem. I became interested in Visual Biology and went on to purse a doctorate in Neuroscience. I am currently studying retinal degeneration and continue to work in my studio making pots.

Q: How did you start knitting?
LR: I began knitting about 8 years ago when a friend of mine told me she learned from Debbie Stoller's book, "Stitch and Bitch". I had always done crafts and until then focused on jewelry and paper making. It was around this time that I had begun making pots as well. I particularly enjoy knitting, because I can take it with me anywhere I go. It is also very meditative.

Q: Do you see a relationship between your ceramic work and knitting? Have you ever combined the two mediums?
LR: I often see trends in my ceramic work that are influenced by knitting. They typically deal with surface texture. I love the tactile quality of both fiber and clay. Though I generally do not combine the two, there was a time when I would soak yarn in clay and use it to add texture to pots.

Q: Tell me about the Neurotrans-Knitters? Is it purely social/support or do you collaborate on designs or exhibit together? Have you started an NYC chapter?
LR: I think many knitters will say that knitting is a social craft. It is much better done in a group. So, as a Neuroscience graduate student, I began Neurotrans-Knitters, a knitting group at OHSU, where I was a student. The group quickly grew to about 50 members - some were expert knitters, while others had never knit before, so I just taught them. We met weekly and knit together on individual projects. We also knit for charity by making small hats for premature infants at the neonatal ward in Doernbecher Children’s Hospital. I have not started a NY chapter, though I joke about it.

Q: You're very committed to giving back, whether it's teaching, building community, or donating proceeds from sales to charities. Can you talk about what leads you to that sensibility?
LR: My parents were always very generous, and they both taught me to be that way. When my father was young, he used to dress up like Santa Claus and bring toys to the children in poorer neighborhoods in Brooklyn. When he died on Christmas morning, my mom said he died at the time when Santa would be finished giving his gifts. I love that. I feel that giving helps me keep his memory. I believe strongly that everyone has something to give. Even if it isn’t money — sharing a talent or donating time — are great ways to share.

Q: What, or who, inspires you? Do you have any mentors or role models?
LR: The children I teach inspire me. Cliche, I know. But they do. They see things simplistically. Plus, they think I’m 18. Laura Peterson, the Founder of Hands to Hearts International has been a very positive influence in my life. I look up to her so much. Eddie Stern, my yoga teacher, always inspires me to be a better person. He has taught me the importance of discipline and caring for myself as well as others. David Straker, my osteopath, is likely one of the most amazing humans on earth. He believes in me more than anyone, and has taught me to believe in myself, too. And my parents, who taught me about love and generosity.