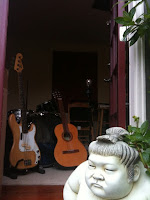 Given his deep affinity for roots, Americana, blues and indie music, there's been no question for me to keep working with Oakland musician, producer and bass teacher Ben Bernstein on my latest recording projects. During the several years I've known him, he's developed his own Petting Zoo studios into a thriving hive of activity for local and touring acts interested in committing their work to recording. As another wave of artists prepare to release Cd's with production and engineering credits to Ben, I asked him some questions about his music and recording aesthetic.

Q: You've been a producing madman this past year—what producers do you look up to? Could you name 3 albums that you look to models of excellence and perhaps exemplify the aesthetic you're going for?
BB: I really like the work Daniel Lanois and Malcolm Burn have done, especially with Emmylou Harris' work. Also, George Martin, of course. Three albums that exemplify my aesthetic goal? Blood on the Tracks, Goats Head Soup, and The Fleet Foxes self-titled debut. It has a really great space on the whole album but sounds clear as a bell. I recommend listening on vinyl. They recorded it all over the place, largely in bedrooms, but it sounds awesome. I went to see them at the Palace of Fine arts and it sounded the same as the recording. How many bands can do that!?

Q: You work out of your home studio and are now working part-time out of 1340 Mission—what do you think makes for a great studio?
BB: Vibe, and great gear, of course. My studio, the Petting Zoo, has an awesome garden right out the door. Artists dig that. 1340 has nice custom burlap acoustical treatments. It's like being inside a warm cup of coffee. In either local, the world melts away, which is very important to the creative mind space. Also, a decent, if not awesome pair of monitors. A separate control room is nice, but I've learned to live without one. A nice couch and a Herman Miller chair adds to the vibe factor. Having a tuned control room is veeeerrryyy important.

Q: What do you think are the necessary ingredients for a good recording session?
BB:Preparation. Communication. Experience. And performance. You can record decent audio ANYWHERE, but if the performance sucks, you've got nothing.

Q: What have you been listening to in your free time? Anything obsessing you?
BB: Again, the Fleet Foxes sound is haunting. Also, some Iron & Wine, and Calexico. I like the semi-dark sound [that] a lot of indie producers and engineers are going for. I think it's the back to analog and vinyl Renaissance movement. Digital recording made things artificially clean. The world doesn't sound like that. There is dirt everywhere. It's part of the aesthetic. You don't want your album to sound like it was recorded in a hospital, do you?

Q: I know you've got a bunch of your own material under your sleeve. How do you know it's time to record your own work and what's ahead for Ben Bernstein, artist and musician, as well as producer?
BB:When there's time. It's all extremely back burner right now. I typically work on my own material when there's downtime, which is a commodity these days, thankfully. Usually it's late at night, but with two kids I am more apt to go to bed given the choice, but that will change over time.
For more information recording at Petting Zoo studio, write pettingzoostudio@gmail.com
Posted by Bird in the Tree at 4:28 PM