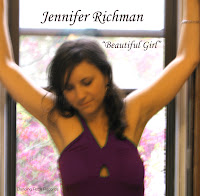 I met musician and occupational therapist Jennifer Richman many years ago at a SXSW Go Girls music showcase when a bunch of we touring artists pooled our lodging resources. A fellow twin with a parallel love of India, we've since shared several more gigs & she once had me as a musical guest at her music class for adults with mental illness. As she readies a new CD, I asked her some questions about her current music projects as well as how she integrates music into her work as an OT.


Q: You've been in the studio a while working on your next Cd-how is this process different than making your debut "Flowers of Gold?" Have you selected all the songs or are you writing new material amid recording?
JR: This album is very different from my first record. Firstly, I am recording not only vocals on this production, I am recording the acoustic guitar and main piano tracks as well. There are only two musicians on the record right now, being myself and the producer Philip A. Jimenez. On my debut album, Flowers of Gold, we featured several musicians, all of whom were amazing and who contributed to the production process. On this album we are also perfecting the vocals to a higher standard with more emphasis on rhythm, phrasing, pitch. The experience is helping me to be a better performer as well as a studio musician. Lastly, this record also has a great deal more focus in terms of the songwriting. In my debut album, I included several songs with different genres. In a sense, I was finding my own as a songwriter. This time around, the album has a central theme and a common thread of style. Most songs were written [within] a year and tell a story which is related to the central theme of what I was experiencing at the time. I have selected most songs for the album and am in the process of writing some more as we go along. This album is very special to me and I am taking great care to put my best work out there.


Q: Who do you look to or listen to for inspiration? Can you describe your writing process?
JR: I am inspired by a lot of inner work, observing the environment around me and seeing how I relate to that environment. I look to my spiritual teachers, including Swami Yogiraj Nanak Chand, for inspiration and often do meditation to try and still my mind enough to simply feel. I try to take the blinders off and see things as they really are, pushing myself beyond apathy. At times I am pushed outside my comfort zone and try to do that with my songwriting. Music has been such an inspiration in my life and I hope to inspire others with mine. When I write a song, sometimes it is born from pure emotion. I pick up my guitar or keyboard and just press record on my digital recorder. When that happens, there is usually between 6 and 7 minutes worth of material that I cut down to make a song. I feel like those are the best songs. Sometimes the song comes from a dream. I literally hear the melody and/or the lyrics in my head and wake to put them down in tangible form. Both "Flowers of Gold" and "Better Days" from my album debut from dreams. I am currently working on one more which I hope to include on my second album. Most of my other songs are written blending poetry and guitar and/or piano compositions that I am inspired to add lyrics to. In terms of drawing inspiration from other artists, lately I've been listening to a lot of Tracy Chapman, Mindy Smith, and Norah Jones. I remember listening to Bob Dylan for the first time and being immediately inspired to write a song. I have always admired Sarah McLachlan's songwriting. I used to listen to her albums for hours. There is a long list of other artists I respect and listen to....


Q: Talk a little bit about the song Beautiful Girl? How did you select that as a single?

JR: Beautiful Girl is a song about self-acceptance and realizing true beauty comes from within. It was chosen as the single because it was getting the most iTunes sales and we went with it. The song has also gotten a lot of international attention and continues to do so. I donated the song (original version) to the podsafe network a couple of years ago and it was immediately played in several countries. I believe I may be more popular in China than I am here. The Radio-Mix of Beautiful Girl is up on iTunes, listed as the "Single" version for people who are interested in downloading it.

Q: You've used music and songwriting as a large part of your work as an occupational therapist with autistic patients. How did you get that started?

JR: I started bringing my guitar to hospitals and clinics during my first experiences working in the field. I was literally a student when I started linking music to my professional life. As a student, I brought in my guitar and played for the patients on a detox unit. It had such a positive effect of them that I started doing it regularly. I then brought my guitar to a nursing home where I worked with physically disabled patients. Again, the positive effect was incredible. "Linda's Song." from the Flowers of Gold album, is about one of those experiences. Once I finished my training and became a full fledged occupational therapist, I was given the go-ahead to start a music group with the adult schizophrenics in a day treatment program. I continue to direct this group and several group members have gone off to become very talented songwriters. I started working with autistic children 9 years ago. Of course, I brought music into that arena as well. The effect was profound. The children were so touched by it that it was at times life changing for them. I've helped some non-verbal children be able to speak and some behaviorally challenged children be self-motivated to interact positively with others simply by introducing them to either an acoustic guitar or a keyboard. I have helped facilitate school musicals, directed by James Fleet, where the most severely disabled children with autism were able to participate actively and were completely on cue. To help spread awareness of the power of music as a healing modality for persons who have autism, I have organized community performances for "Autism Speaks" for 5 consecutive years. Music is a language that is universal. It is a language of emotion.


Q You're now on National Task Force to help improve Mental Health for students Nationwide. How did that come to be? As your music group has been an integral part of your work with your clients, will you be sharing that experience with OT to the Task Force?

JR: Research shows that students nationwide are developing mental health challenges such as depression, isolation, emotional disturbance, autism at alarming rates. The awareness of mental health needs is crucial at this time. The American Occupational Therapy Association started a national task force to try and educate not only professionals but parents of the importance of tending to mental health as a growing trend. I was asked to be a part of this task force by a former teacher of mine who knew the director. She recommended me to the American Occupational Therapy Association because of my work linking music and OT, knowing that my focus has always been the link between meaningful activity and treatment. It was a good fit because of my consultative work for the New York City Department of Education in addition to my experience working in mental health as a senior occupational therapist at New York State Psychiatric Institute. I have a lot of clinical experience to share and have been a member of this task force for about 2 years. I've advocated several clinical examples of the success using music as a modality, including community outreach. We have provided a continuing education course for the AOTA as well as lectured at the National Conference where I advocated for the importance of using music as a means of treatment for autistic children. [I am also] a guest lecturer at Columbia and Downstate Universities where I discuss the benefits of using music as one of the treatment modalities for autism.

Q: What do the next few months look like for you music wise?

JR: We will be continuing to promote Beautiful Girl to national radio. It is an exciting time. I'll be continuing to perform live as well, with my next performance being August 20th at Gizzi's Coffeehouse in NYC. By the Fall, we will be in the finishing stages of my second album and look forward to releasing it. I am inspired to begin writing for other artists and am currently looking into that venue as well. In terms of my work with people with disabilities, I am in the process of organizing a concert for the music group I run at the day treatment program in NYC and am sure the doctors and related staff will be blown away by the talent that has blossomed from the group in the past months.