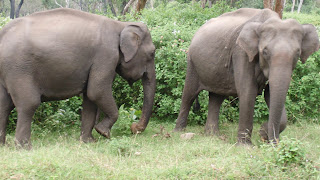 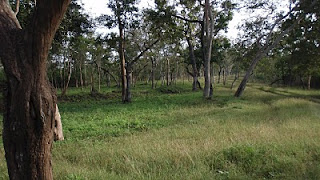 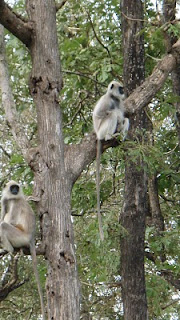 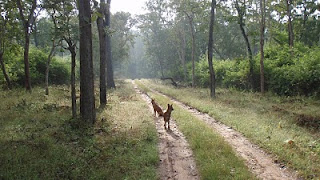 New Moon weekend called for another getaway, this time to the more untamed side of India. The possibility of seeing a real live wild tiger compelled a crew of 7 yoga students (plus a driver and his assistant) a few hours south of Mysore to Bandipur National Park which straddles the states of Karnataka and Tamil Nadu. This weekend's getaway crew included Veronique, Amanda, Yan, Katherine, Susanna, Lin and myself, which meant our accommodations wouldn't be too rustic. The Jungle Hut was no Windflower, but it was comfortable, fed us more than well (per usual) and set at the foot of the 4000 ft Nilgiris Mountains, scenic. A 5am wake-up call got up for tea and biscuits and a jeep driver named George, who ferried us to another jeep driver/guide named JP who would take us on our jungle safari, off road, and through the park. I thoroughly enjoyed bouncing around in the jeep, scanning the bushes for any movement. 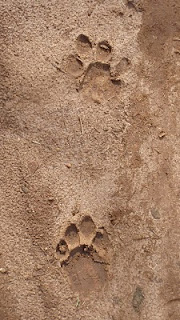 Everyone wanted to see a tiger, which made our guides laugh. Nocturnal and elusive, the 45 Royal Bengal Tigers who lived in the park would be hard to see, even at the crack of dawn....but Snake Eagles, colorful kingfishers, Indian Wild Dogs (called Dhol and looking like they were equal parts fox as dog), Gaur (an Indian bison), Spotted Deer, Barking Deer, Black Faced Monkeys, and a trio of the 2500 Elephants who roamed the park, assuaged the fact that a tiger sighting wouldn't be ours. Nonetheless, just as we were nearing the end of our trip, JP stopped the jeep to point out some telltale tracks in the mud that had left the night before. I was impressed at both their size the proof that somewhere, not so far from us in the jungle forest was one of those very big cats (average size of tigers is between 300lbs for the females and nearly 500 lbs for the males).
Sad fact: poaching is an omnipresent problem. One of our safari stops was an anti-poaching camp whose guards made us some extremely sweet tulsi tea. Despite their efforts, 12 cats (at least) were lost to poachers last year, and the tiger population is having a hard time growing. 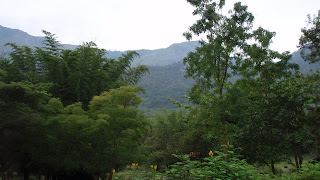 I had seen your post that such a greatful blog.
resorts in coonoor
bandipur safari