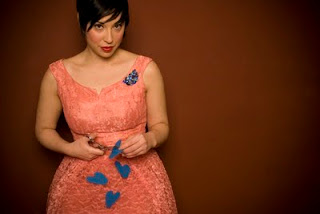 I was delighted to see Francesca Lee at a recent show, where I got caught up on her latest projects and work with Bread & Roses— an organization that brings music to institutionalized and otherwise isolated-from-the-mainstream populations.  Francesca's having a great year--in addition to being passionate about her job, one of her songs was included on the BayVibes Songwriters Unplugged CDs, and she recently released a lovely video of her tune 'Paper Hearts.'
Q: How do you describe your music? Do you remember writing your first song?
FL: I often describe my music as introspective alt/indie pop.  My inspiration for songs comes from the emotions I feel, my observations and personal experience. The songs can be played with a full band or with just me on piano or guitar. I have a poetic style of a folk singer, a voice that has a lot of jazz influence  but a very contemporary pop aspect in my music. I started writing music when I was 15 years old, and [my first song] was titled "Fade Away." I recorded my first demo in Texas in an analog recording studio with a country session band. One of the band members compared my style at the time to Joni Mitchell. That was such a wonderful compliment to hear at the age of fifteen years old and it's probably those words that planted the seed in me.
Q: Describe your writing process: Do you wait for the muse or sit down and say, 'ok, today a new song?' Has your process changed much since you starting writing?
FL: I would have to say that I am the type of songwriter that does need the inner muse to get into the creative flow. I write from a very personal place so it is important for me to spend less time thinking and more feeling when I am in the creative process. When I haven't written a song in a while it usually takes me a couple of days of just playing the piano or guitar before I even get into my flow, and in a week I might actually have a song. However, it usually takes me a couple of songs I would never show to anyone until I finally start writing one that I know has got something really special to it. My writing process has changed a little since I began writing. Nowadays I hear so much more when I'm writing a song. I work with drum beats, write parts for other players and instruments, orchestrate harmonies and have ideas for production when I'm writing a song.

Q: Tell us about your work at Bread & Roses...
FL: I started working as a show producer for Bread & Roses in 2010. Bread & Roses is a amazing non profit that was founded by Mi Mi Farina in 1974. Our mission is to bring hope and healing through live music to people in isolated circumstances. We produce 600 free shows a year in places like drug rehabs, hospitals, convalescent homes, homeless shelters, jails and centers for the developmentally disabled. All of our musicians volunteer their time simply because they believe that music has the power to heal. I absolutely love what I do. It feels so good to wake up every morning and know that I am making a difference in peoples lives and through one of things I love most: MUSIC.

Q How has your recent appointment at Bread & Roses affected your music, or has it?
FL: It has affected me a lot as a performer in many positive ways. I book around 15 to 17 shows a month so you can imagine all the music I am exposed to on a regular basis.  In addition to working as a producer, I also perform frequently for Bread & Roses. I've performed at drug rehabs, juvenile detentions, mental-health facilities, homeless shelters as well as homeless teen programs. When you perform Bread & Roses shows you really have to know the art of connecting with your audience and sometimes it can be challenging. This is such good practice for anyone wanting to pursue a career as a performer. I have found that my stage presence and overall performance has grown so much since my work with Bread & Roses. I feel the most comfortable I've ever felt as a singer, songwriter and performer.

Q You recently released a video? How was that process compared to making a record?
FL: Yes, I recently released my new music video for my song "Paper Hearts" off my album The Pieces Left. The video was produced by Michael Coleman who is a very talented SF Bay Area filmmaker. I met Michael through KFOG when I was performing live at Gordon Biersch in San Jose for the KFOG morning show. I love Michael's work and felt that he really brought out the vision of my music. The process of making a music video was a little different then making a record. I think the biggest challenge was switching my role as a songwriter to actress. I have a little acting experience but not much. My video was different then just a girl with a piano being filmed because we actually had a story line. We filmed in some extreme weather conditions as well, even though you can't tell in the video. I was so cold when we filmed the second half of the video that my fingers were almost frozen. My sister Erika worked as my makeup artist during the shoot and thankfully she had a jacket for me between shots. Film directors will do anything to get that perfect shot!

Q What can audiences & fans expect from Francesca Lee in 2011?
FL: A live performance of 3 songs that will be premiered on Live at Bay 6 on Harwood Podcast this July.