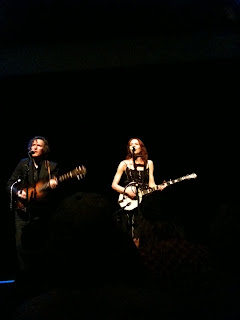 For whatever reason, the stars aligned for me to see a wealth of great performers over the span of 6 days. Rickie Lee Jones @ Davies, touring Indian Classical musicians Vikash and Prabhash Maharaj at a house concert, ace steel player Bobby Black playing old time  with The Saddle Cats at Speisekammer, Gillian Welch in Petaluma @ The Mystic Theater and, yes, and, Iron & Wine at the Warfield. It's like I've been in a warm sonic bathtub all week.
If I put aside everything, I could write a tome about each, but I'm still processing it all. So for the moment, I'll assert that Gillian Welch really is a master songwriter for our times, managing to express the past, present & hints of the future in concise and complex song snapshots that are very of the moment. Sans opening act, she and David Rawlings took the stage with their guitars and voices and bowled the crowd, who already loved them, over. The duo played songs from their full catalog impeccably: Rawlings a soloing madman on his guitar; Welch a study of understated vocal and rhythmic perfection. Included in their two-sets where Revival's Orphan Girl & By the Mark, the bulk of Time (The Revelator) including it's transcendent title track; Soul Journey's Miss Ohio & No One Knows My Name (a song that is just perfect in my book) as well as some tunes to be included on her upcoming CD The Harrow and the Harvest. Rawlings also sang a couple tunes from his A Friend of A Friend, including 'Sweet Tooth' which is rabbit hole (in a good way) of a song that's clever, complex...and funny.  But sticking with Gillian for now, here's a video of Time (The Revelator).
Posted by Bird in the Tree at 8:42 AM