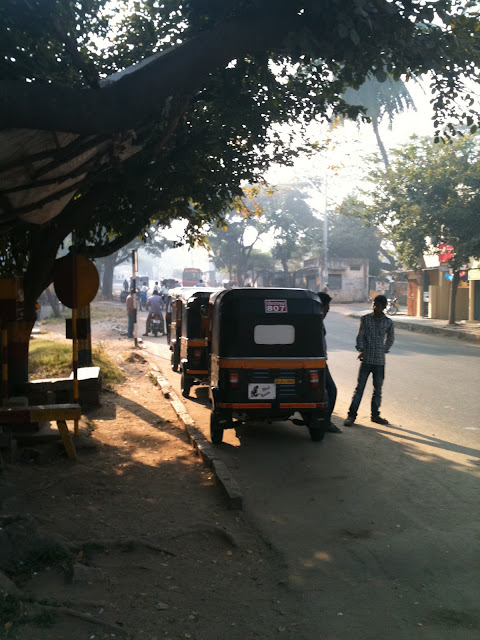 It is hard to imagine the number of tracks a recording engineer would need if he or she were to try to replicate the sound of India in the studio, layer by layer. My experience of the aural landscape in India is like none other, an incrementally building multi-part orchestra of human, avian, animalian, mechanical and meteorological hoots, honks, scrapes and blares that builds to a sometimes intolerable thickness. I’m especially struck by this on rare mornings when I sleep in (rarely past 7am so as not to disrupt the pattern of early morning rising necessitated by the practice schedule), and can sit and listen a while before entering the landscape with my own set of parts. Today, Saturday, the first sound to my ear is that of a maid sweeping the walkway, a distinctive sound in of itself, as here the brooms are made of sticks that scrape the pavement in a way that is both sharp and oftentimes wet sounding. Underneath that layer is the low moan of wailing coming from the Muslim temple. There are at least three different birds calling: one crow, something like a dove and a small songbird. Two ubiquitous sounds — a moped's whine and a gate opening and closing — arriving solo this early in the day, sound almost forlorn, as they will be joined by a larger chorus of gates scraping and scooters beeping as the day busies. More doors closing by the neighbors upstairs, a rickshaw's engine clank and clatter, and a flute's call, recorded or being played by an early morning rehearsal, float down the street. The voice of a radio announcer speaking Hindi is a distant murmur. Then, the downstairs neighbor dog begins to bark and growl to be let out, and more gates open and close as people up and down the street begin to rise and go about. Somewhere else, water is at first run from a tap, then poured onto the ground. More birds, flying overhead, chirp and call. In the evening, the sound of parrots will become more frequent. Mid- to late-afternoon, there's a largish, brown striped bird that half hoots, half coos in the high branches of the trees.
Listening as I am now, the reason much of Indian music is written to be played at certain times of day, each raga having a distinctive rasa that suits or emulates the color and mood of the hour, makes sense anew. The morning here is so the morning.
Second by second, the pace quickens. One of the Western-model cars, a more prevalent sight this year, whirs a little too quickly down the narrow street, which doesn't comfortably accommodate the vehicle's size and speed. Footsteps of a person walking hurriedly, the heavy hoof falls of a cow ambling down to the house whose owners will let it in the gate to graze on their greenery, and a waking person's cough, pipe in. In an hour or two, the street vendors, Mysore equivalents of door-to-door salesman, will push carts full of vegetables, plastic-wares or fruit, calling out the name of their wares. There is no need to knock on the door. If someone wants to make a purchase, doors are opened to the caller and negotiations made over the front gate. I walked past one of the vendors yesterday, pre-sale and in full advertising mode, and was struck at how deep and rich a voice he had from his repeated calling. I imagined his singing voice would be pleasant...provided he chose a new song.
I should add that I'm staying in a relatively quiet and upscale neighborhood. My doors and windows are secure, the walls of the house cement. I don't know if anyone ever thought to mute all the sounds here, volume seeming more a matter of tolerance and might (if you can't hear, turn it up seems to be the approach, especially to televisions, another sound that's starts streaming from many households in the evening).
Out on the main streets, the sound intensifies, with buses, horns, people walking, talking, being. On 'thin-skinned days,' as I call them, when practice has felt taxing or opened me up past comfort, it's wise for me not to venture that far out. Downtown, every sound is turned up, in double-time and mult-part. Yesterday, drinking chai with a friend before a kirtan which would waft a layer of chanting voices over the neighborhood, a large truck drove by only to have a tire blow out in a loud punctuating pop. Another chorus of beeps and honks went up from passing traffic, along with a crowd of voices closing in on the truck to vociferously consult and opine.
It is rarely if every silent here, though there are ports of calm. Waking in the deep of night, sounds are fewer and further between. Wind in the trees punctuated by the occasional sound of a strange, not quite identifiable animals—perhaps it's sparring feral pigs, or a street dog fighting a small animal, or cats in heat? I don't really want to know.
The yoga shala is a relative oasis, full of its own unique acoustic blend of breathing, the occasional murmur of the teacher's voice when addressing students, sounds from outside getting in to provide context: dogs fighting, coconuts being split, children on their way to school, and the steady rhythm of rickshaws coming and going.
It has been less than an hour since I started this post, and the first street vendor is already walking through the neighborhood calling. Far away, a vehicle, or maybe a train is blowing its horn in a low constant. Another car or truck is backing up, emitting a tinny musical recording as warning. The day is very much on its way.