I haven't been blogging too much the past few weeks as I was ...planning my wedding! There is so much  material around this act that, between all the details one must get in line for a wedding (however 'small') , I've been hitting the pen and paper harder than the keyboard. The old-school method of writing by hand is still more hard-wired to my subconscious than the trusty Mac.  Now a bunch of chicken scratched notebooks are laying about to sort....
In any case, for much of the past 15 years, I didn't think I ever wanted to get married again. For a long time I didn't even want to be involved with anyone for more than a couple of months! Can we spell out the word f e a r ? But along the route that has led me from the end my first marriage to here, I've become better at questioning my habitual response mechanisms. Which is why I finally landed on a big 'yes.'
And this yes led to planning a wedding.
Despite my penchant for auspicious signs, we chose the date based on convenience: it was a weekend we were free during a relatively light travel month and the summer months were pretty planned out. Likewise, we didn't want to wait and over-plan and overall get too overblown about the event in general. So May 20 it was. Only later did I discover it to be not only the Sunday of the New Moon (a great time to start new things), but a Solar Eclipse (a chance to 'reboot' your life)! And it turned into a beautiful day.
Yes, I'm finding, is a lot more fun than No.
Am I immensely grateful?
Yes! 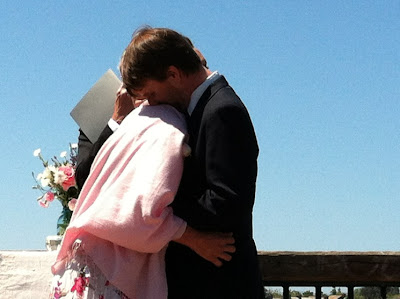