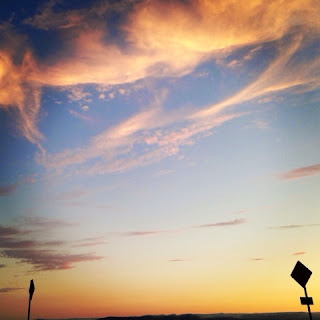 I pretty much run my life on projects. I didn't consciously plan this, but over time I've seen the pattern. There's always something in the works: a show, a poem, a song, a tour, a recording...a blog post. It's how I create order and meaning for myself, even as I know things run on their own time, despite my intention and bunch of calendar entries, and the world may perceive things very differently than I do.  I can't really tell what and how my project habit will add up to in the end, but I do know I feel happiest when I know I've made something — which I hope will be of some value — that wouldn't have happened without my efforts.
Such was the case for Saturday night's show, a showcase for six songwriters, three of whom would play in the round on stage at once. I've been doing these songwriter showcases every few months for the past couple years, rounding up five other artists and playing myself. It's not a unique formula —playing-in-the-round, one song at a time, is a fairly traditional way of sharing a bill — and we knew the venue well. But I started to freak a little when two artists had yet to arrive five minutes before showtime. I sent the first three artists up to begin and began texting and emailing the others. One confirmed straight away they'd be late due to a contentious commute. One artist (who I'd learn was not feeling well the next day) would not show.  My mind racing, I scrapped the intended order and made a game plan to swap out an artist every time they'd completed a turn of three songs. Amid the shuffle, I sat down and played my songs,  too anxious about how the whole evening was being received to feel nervous about my own performance (Perhaps that was the hidden benefit?). 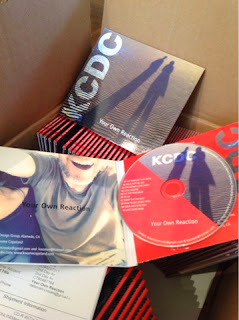 In any case,  it all was fine. More than fine. The other artists were relaxed (and good at what they were doing) and the audience enjoyed themselves. Food and drink kept coming out of the kitchen, new connections were being made, and by the end of the evening I was enjoying myself as well. We'd done it.
Yesterday, we came home to a box of our newly-pressed KCDC "Your Own Reaction" CD. We first wrote these songs as a songwriting challenge in February 2013. We recorded them in September that year, and we've been overdubbing and then mixing up until a month ago as schedules allowed. We haven't been hurried or anxious about this project but we've kept it going, scheduling rehearsals, working with engineers and graphic designers and learning parts amid work and other projects and, in the case of our co-producer, a pregnancy and birth.  September of this year, we'll release the music officially and have a show.
There will be more to do between now and then, but yesterday, we turned over the CDs in our hands to check it all read correctly, then popped one into the stereo to make sure it played. We had run into a friend on our way home so we gave him one, too.  We felt pleased with our musical efforts. I noticed when I woke up this morning, I'd slept better than I had in weeks. Chaos and meaningless averted... for the moment! 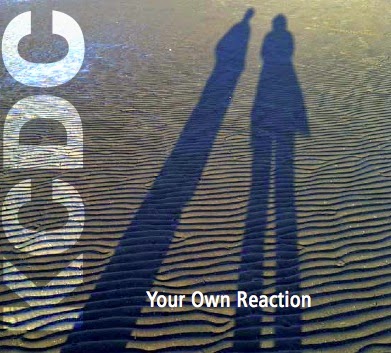