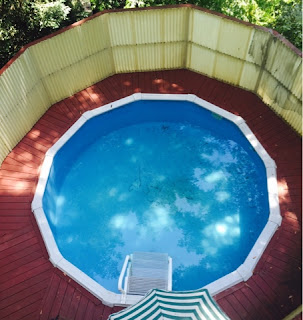 My sister was pushing me faster and faster around the pool, as I lay on one of those inflatable floating mats. This was thrilling. There was much shrieking and splashing. And then the mat flipped. All was quiet as I swam underwater for what was likely no longer than 15 seconds, but felt like a vast sea of calm.
My family was up at the river, visiting my aunt and uncle who had the place in Guerneville with the pool. On a hill full of redwood trees, the cabin's northern California landscape setting wasn't so different than the one that surrounded our house, a few hours south. But "The River" was a different place. People came here to get away from the city, to retreat and frolic and vacation, not raise kids (though of course, there are plenty of families here, too).  Along the clean air and views of the country, the little unincorporated town had a bakery and  restaurants within walking distance of my aunt and uncle's place.
The fact that they had a swimming pool, a round fiberglass number,  was a big deal at the time.  I must have had a swimming lesson or two by the time I visited, but as a rule, we didn't swim much.  When it was hot in the summers, we ran through the sprinklers to cool off if we didn't head to the beach. Our favored, and closest, beach, 10 miles west of where we lived, had huge signs in the sand warning of rip currents. We didn't dare go in past our knees. So the sudden immersion into the round, not-too-deep-but-deeper-than-a-seven-year-old pool waters turned into my first 'swim.' I was pleased with myself when I surfaced, but my mom was as angry, and scared, as if I'd been swept away by one of those Pacific riptides. It was a confusing re-entry, kind of like taking a nap and then walking outside onto a construction site. Perhaps its why swimming pools never really became my place of solace. Still, in lieu of a beach....
Read: I'm already annoyed* with Michelle Goldberg's book "The Goddess Pose: The Audacious Life of Indra Devi, the Woman Who Helped Bring Yoga to the West," or rather with Goldberg, but I'm eating up this book all the same. Indra Devi, one of the more famous and few women students of  Sri Tirumalai Krishnamacharya, had a long and colorful life so she makes for a great subject.
*Goldberg breezily (which is damningly and inaccurate) describes traditional Ashtanga yoga as being originally intended for young boys.
Eat: Chances are, we were eating Popsicles while poolside. Those multi-color rocket ones or maybe a fudgesicile. Circa 2015, I'd make it more like this vegan Fresh Summer Apricot Pop.
Listen:  More recently, we've found ourselves driving on a lot of dirt roads, in the desert a couple weeks ago and this past weekend in Marin. Some of the best listening while driving those dirt roads, we found, was the wonderful and wise Greg Brown. I love his daughter Pieta Brown's music, too, so I started digging up more of her tunes. Goodness.
Then I found this video of Pieta Brown playing a Lucinda Williams song with Greg Brown and Bo Ramsey. So here you go:
Posted by Bird in the Tree at 5:23 PM