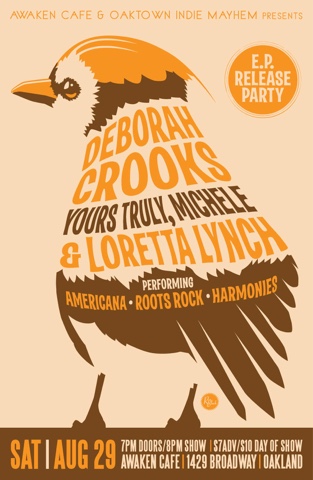 I'm so looking forward to playing with the band in celebration of my Something Special  EP. Please join me, Saturday, August 29,  as I showcase songs from the EP on a bill with two of my favorite bands Loretta Lynch and Yours Truly, Michele.

Loretta Lynch: 8pm With dreamy three-part harmonies, raucous, surf-tinged guitar and more than a bit of tongue in cheek, the East Bay Area’s own alt-country outfit Loretta Lynch’s stirring songs reach the shady grove in all of us. A little tear in your beer, a little knife in the back – think "O Brother Where Art Thou" meets the Andrews Sisters’ disreputable cousins at a warehouse hoedown. It’s Americana Noir.

Yours Truly, Michele: 9pm Michele Kappel-Stone began singing onstage as a teenager, when she donned a head-to-toe white leotard and crooned “Sex in Wetsuits” as part of the multi-media avant theater company Impossible Industrial Action. The Baltimore native’s latest venture, Yours Truly, Michele, may best capture the heady mix of influences and experiences she can bring to any party simply by showing up.  With a sound infused with 60s pop and soul and infected by Americana Roots-Rock, YTM can evoke Debbie Harry, Erin McKeown, and Patsy Cline.

Deborah Crook: 10pm Deborah recorded Something Special earlier this year at Lost Monkey Studio in Hayward with Mike Stevens on drums, Kwame Copeland on guitars and Andrew Gibson on bass. The songs on the EP cover such topics as seeking transcendence in the myth of Bigfoot; recovering from a breakup in a 50s era LA Travelodge, and keeping the faith while being lost. Come take a listen!

Hear “India Street: on Soundcloud:
Posted by Bird in the Tree at 9:00 AM