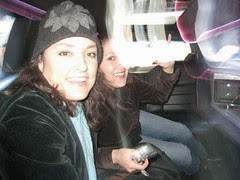 Synthesizers, amplifiers, Twitter projections. Remember when people played instruments and turned pages? Friday was about striving to keep it real within the Web 2.0. The release of an old-school hard-cover book by Rhohit Barghava "Personality Not Included: Why Companies Lose Their Authenticity" was the cause for celebration at The Sugar Cafe. The party owed a lot to the Twitter-cast on the wall (if you tagged correctly, your "tweet" went up on the wall), though, frankly, this gig was characterized more by the free "rojitios" and dj beats than any book reading. Arriving in a limo with Denise, Eric and Arian, care of Denise's quick thinking on the way home from 415 Friday made the night that much more sweet, but after a couple hours of twittering and wondering just how many rojitos one could drink without turning into a total ass (I switched to water early and went into observation mode), I hopped on BART to decompress from all the spinning. I promptly ran into Sid, from the Hayes Valley hood, and talked politics all the way under the Bay to the Ashby station and the Starry Plough. There, two pals were playing in different acts (Producer pal Ben Bernstein was opening a night, which included Emily doing duty with the ever more polished Whoreshoes, who were on second) on a three-band bill of acoustic, old-timey and celtic tunes. I took a spot at Emily's table and caught up with Michael from Pyramind, who was resting up from his week at the studio, and Corry from the Hearken Backs, and the rest of the night was a lullaby of banjos, stand-up bass, mandolins and fiddle. "Good times," as Michael opined. Yessiree.... I won't be turning down any future limo rides; however, the ride home in the City Car Share wagon with Michael and Ben's drummer and girlfriend was just as comfortable.
Posted by Bird in the Tree at 1:11 PM

You look a little bundled up there! We had summer here for a day yesterday. It's back to dreary today, but at least a skull cap is unnecessary.

yeah, it's been cold/hot, hot then cold wind, hot then fog, SF!