on turning things over: Jane Siberry 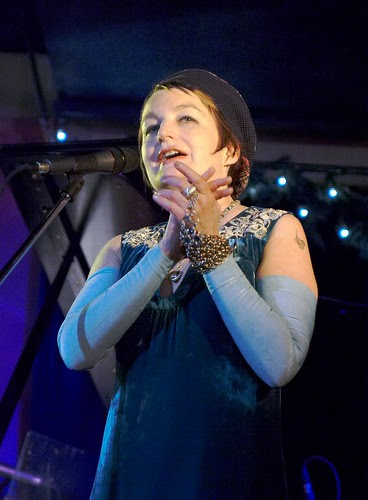 This has been my month of doing things differently. Going to different yoga classes, not going to ever social activity that presents itself, drinking as little to none of my drug of choice, coffee. I've been grumpy a lot (!)..even though I'm completing things, namely the full-length CD that's been dogging me for a bit. Things do have to change when ya turn things over and pause more, including, an renewed urge to write, and, this week dreaming. This process, a fraction of which I'm writing about here, led me to remember Jane Siberry, a Canadian artist my friend Sally turned me onto years and years ago. I saw her perform a few times, once at the Bluebird in Denver more than a decade ago, and another time at the Great American Music Hall, and was wowed both times. One of her tunes "Calling All Angels" went on to garner widespread release and movie soundtrack usage. Quirky and no-holds-barred original as she was, she still 'made it' in many ways. Well, two years ago, continuing down her road of very much going against the grain, she changed her name—she's now 'Issa,'—renounced many of her possessions, made her tunes available online, via donation, and became somewhat of a nomad. I think she even has her fans cook for her in advance of her shows. Now that's an independent! And brave. I looked her up today and saw she's recording again, too, busy as ever, at notating her process of striving to be honest as possible, to the core. Key reminder to continue to let ones art & soul lead you, not the noise.
Here's quote from her explaining to interviewer Alexandra Gill her line-by-line process of writing, which can be applied to all actions:
"You just sit there and don't do anything until you hear the next chord. There's no self-doubt, there's no second-guessing. It's just you,without the normal filters and clutter. It's pure, unless you screw up by letting your brain get in the way." —Jane Siberry.

"...unless you screw up by letting your brain get in the way." Nice! I'm doing things differently this month too, but on an emotional level. Ain't it great?