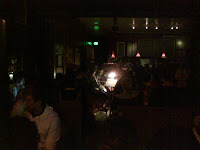 So my quiet weekend went out with some music. One of my plans in India is to reboot my occasional study of Indian vocal music. With the trip ever on my mind, I got home Sunday and realized it was 3rd Sunday Kirtan with Karl and headed over to YogaLoft. And hour and a half of devotional singing did wonders. As I was leaving, Aaron called and reminded me it was Classical Revolution Night at the Revolution Cafe so I picked him up and headed to the Mission for a weekend nightcap of classical music by local maestros. Basically an open jam for the classical set, the weekly+ sessions feature a ever rotating circle of violinists, cellists and the occasional piano player playing the classics. The place was packed. I made up for missing the lovely Kitka's actual lullaby show in Menlo Park while thanking the city for being its SF-cultural-melting-pot self anew.
Posted by Bird in the Tree at 8:59 AM