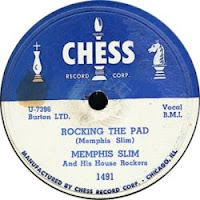 Saturday, I walked down to Opera Plaza to meet Em (and her banjo) for a screening of Cadillac Records, the bon-bon of a movie featuring Adrian Brody, Beyoncé Knowles, Jeffrey Wright and Mos Def as the Chess Records' label founder and his stable of drop-jaw talent: Etta Jams, Muddy Waters, Little Walter, Chuck Berry, Willie Dixon and the rest of the musicians who defined Chicaco blues in the 1950s. The movie isn't as great as the people and music it seeks to portray, but the loving eye director Darnell Martin casts on recreating the process of making the great blues hits of the era equals pure joy to both watch and listen. There's lots and lots of juicy studio drama (aside: engineering sorts will be scoping out the pre-Pro Tools gear and live takes. Were those the mics they used?) The story of music's powerful ability to transcend race, class and circumstance is a heart-warmer while the cast is equally kind on the eye. A scene of Beyoncé-as-Etta belting out an classic James tune to signal the end of both a love affair and an era is tear-worthy. Yeah! Now go by the soundtrack and be glad most of the royalties and credits have been straightened out to give due credit to their rightful creators (There's a post-script about how the copywrite and publishing was worked out in later years that's pretty interesting itself)
Posted by Bird in the Tree at 1:18 PM

Maybe this will be the first film I will see in three years.

Turns out I know Adrian Brody's mother. She's a wonderful photographer, Sylvia Plachy. I have an intriguing print of hers in my bedroom.

uh, how do I arrange an introduction with her son. :)