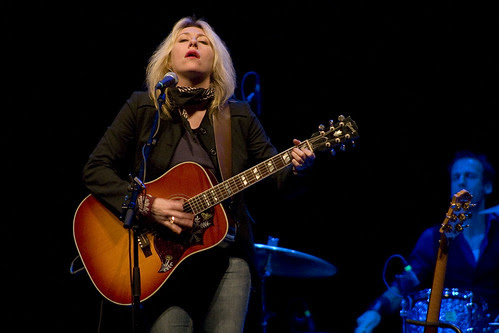 The 17th iteration of Noise Pop permeated much of my week and I still only attended a fraction of the festival's many offerings. Last week, I checked out the clear crisp photos of Lauren Dukoff — most portraits of the Devendra Banhart clan — on exhibit at Eleanor Harwood Gallery. This Friday, I attended
Industry Noise, where music makers and industry went head-to-head on where money was being made and how..what it all might mean in these highly digitalized, perilous-economic times. How do you make money when much of what used to be paid for is now free, many people pay more for a ring tone than an actual song and mp3s have co-opted CD quality? There were no clear answers & lots of opinion, but one important clue was provided by Tim Quirk, of Rhapsody: "There are a lot of different models out there, but we haven't agreed on one, because people who are used to making a certain amount are still arguing about what their cut is going to be."
Much of the discussion echoed the issues discussed in the book I've been reading "What Would Google Do?" by Jeff Jarvis, which I thought everyone on the panel (and the indie musicians in the audience) might want to read, as it clearly outlines the new 'rules' of media Google has pioneered. That is, if free is the business model how do you eat? Well it's gonna take the creativity that makes music to answer that question. And everyone agreed, people loved music, (if not all the same genre)....
So, as usual, after all the talk, I realized my own opinion hadn't changed much: I'm glad I'm part of both an arts and media community dedicated to following their noses...that routinely have to resourceful and above all, I appreciate LIVE music most... which is where I put my money Thursday for Martha Wainwright's turn at Slim's.
The great thing about festivals is you often go for one reason, and discover something new. I got to Slim's midway through local Ryan Auffenberg's set (missing opener Karina Deneke altogether due to checking out a new rehearsal studio), whose voice & tunes such as "Marigold" led me to revisit his myspace page. The next on the bill, AA Bondy, was a cross between Bob Dylan crossed with SF-fave Sean Hayes ( though a bit darker and edgier. Bondy's Mary&Jesus-laden lyrics featured blades at throats and a lot of the energy of his set derived from his rhythm section. I liked their energy as much as their songs.
A crowd had built by the time a just-off-a-plane from London-to-New-York-to SF, Martha Wainwright, took the stage. Wearing impossibly high looking red heels and claiming jet-lag, neither challenge impaired her vocal power or stage swagger. Many, many years ago, I saw her father, the brilliant songwriter Louden Wainwright III play and remember being struck by his penchant for constantly moving his body and wagging his tongue while he played as much as his songs. Musicianship was not the only thing he passed down to his daughter as she belted out her first tune solo-acoustic in full, clear tones. Featuring songs from her last Cd "I Know You're Married But I've Got Feelings Too," I loved not only the prickly lyrics, but the fact that despite them, she's now married, evidently happily to her bass player. Introducing a new song, she explained "I was newly married, singing songs like [the CD title] and he was like 'who are these people? What's wrong with you?' so I tried to write a love song." It still wasn't necessarily hopeful, but it was true with the capital 'T.' Right on sister, for keeping the groove, the muck and the feeling. No one may know what it all means, but making the it feel and sound good can go a long way.
Posted by Bird in the Tree at 6:12 PM