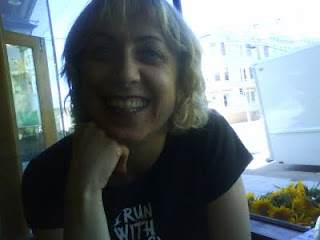 Singer/songwriter Dianne Nola is one of those low-key San Francisco artistic gems. While she doesn't push to gig at every opportunity, she can blow an audience away with her powerful, heartfelt blues and piano playing. Which is what happened when I heard her sharing a gig along with several other local songwriters a year or so ago. While we hadn't met earlier, we found we both attended UC Santa Cruz around the same time, where she studied dance and music. In the year or so since we met, she's been quietly working on both a self-produced CD of traditional blues tunes as well as a collection of original songs. Over a strong cup of Blue Bottle coffee not far from her home in the Richmond District, we discussed her work.

DC: Where are you from? Have you always been a singer?
DN: I’ve spent half of my life in San Francisco, but I’ll ALWAYS be a country girl at heart. I grew up on orchards in Northern California. I started singing when I was 10. So no. I’ve always been a dancer and an artist. I have a lot of identities. In this society we box and label everything and that goes against my nature.

DC: Tell me about your new blues project--how is it different than your other CD that you're doing?
DN: It’s really an old blues project. I mean I started performing the blues in college and sometimes I feel like I’m in a tunnel when I play. It’s such an altered state of consciousness that it is one of the few things things that make me believe in past lives. However, the recording project is comprised of blues covers ranging from the 20s-50s. Just piano and voice. I’m editing the vocals now. The other CD is originals and has a lot more production on it: a band, harmonies, some horns.

DC: You mentioned you're into soundscapes....what are those about?
DN: The soundscapes are about my internal process and aren’t necessarily musical. They incorporate more of my voice-over aspect, and frustration with life. Topics range from drugs, the last election, moods, relationships. Some people love them, some don’t get them. They’re very edgy.

DC: Who do you count as your main influences? I know you've an interest in classical music as well as blues?

DN: In the past 10 years I’ve been influenced by local artists and friends. In the last three years, I’ve had a lot of trouble with being inspired by popular music. For that matter, I’ve hardly listened to popular music in the past 20 years which is strange for a musical artist... For about five years, I was really digging in, studying and playing early classic blues. I wrote the article on Wikipedia on Classic Female Blues! I was obsessed at the time—playing 6 hours a day. I love it when I go through cycles like that! In regards to classical music, I’m not a fan of [much] Baroque. Anyhow, classical (especially solo violin or cello) is the only music that emotionally moves me these days. I retract that. Billy Strayhorn is god but he’s a composer/lyricist. There’s a lot of jazz and jazz players I worship. MARTHA ARGERICH! I feel really connected to her these days.