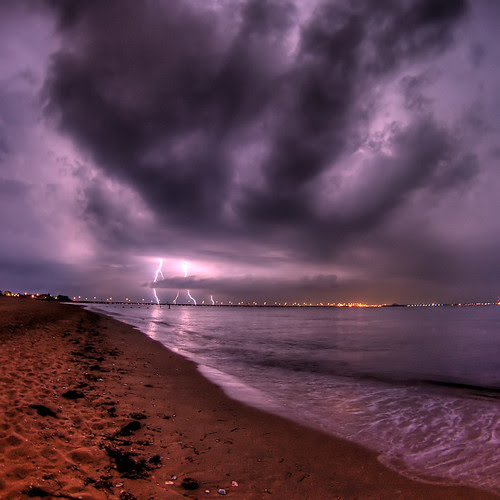 Lightning in California surprises me. On the coast of California, (mid-coast though some would call it North here in San Francisco), lightning is aberrant. Laying in bed at 4 in the morning, my mind first registers the flash as something else--electricity generated by a a car or a building, not nature. Then thunder and I am miles away, in Colorado or Italy or India.: laying on a driveway waiting for afternoon thunderstorms to roll over us; standing against the wall of an ages old church, looking with the fisherman dressed in their colorful rain jackets to sea, wondering when it will pass. Or India, the start of the monsoon, my feet muddy from running in the rain, parrots flying as quickly and silently as I run to their own kind of shelter. I am not, at first in San Francisco, where I am in body. San Francisco has been feeling more often a perch between trips, though always, bedrock (or rather sandstone) to bounce off memories, sift through what has just occurred. A few more lightning bolts, then slumber. Touring is gratifying, and it's taken several days to recover. Tour-lag I suppose.
I'm playing at Socha Cafe tonight! the debut of the Crooks/Walsh Blues plus sets by Ben Bernstein & Kwame Copeland. Come on down. Socha Cafe, 3235 Mission Street (@ Valencia), San Francisco • 8pm-11pm • ph: 415.643.6848
Posted by Bird in the Tree at 11:10 AM