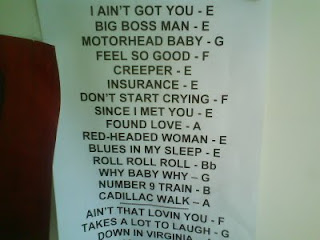 I heard a glut of greatness in the musical department during the past week, Boz Scaggs & his "Blue Velvet Band" an all-star group comprised of James Cotton, Austin de Lone, Nick Lowe, Buddy Miller, Derek O'Brien, Jimmie Vaughan and Jack "Applejack" Walroth who put down amicably & politely ( many lionine musicians sharing a stage at the same time trading licks!) on a list of blues standards with a few originals thrown in for good measure. This is a photo of the actual set list.
All these greats were in town for Hardly Strictly Bluegrass, San Francisco's free music festival that packed in 100,000s of folks to Golden Gate Park. I found the crowds a bit overwhelming but that didn't stop me from catching sets by Buddy Miller (joined by Robert Plant! & Emmylou Harris on a couple of tune each), Old 97s (who had Exene Cervenka sit in!)& Okkerkill River (who I could appreciate more fully here than during their opening set for Wilco a couple months back) with snippets World Party, solo Nick Lowe & Richie Havens for good measure. Yes to I-N-S-P-I-R-A-T-I-O-N. If I can stand it, I'll likely go for more today.

I'm also excited this week as Roseanne Cash's latest CD, a covers album called "The List" which pays tribute to many of the 'essential' country songs her greater than great musician of a dad Johnny Cash put on a list made for her of required listening.
Posted by Bird in the Tree at 10:40 AM