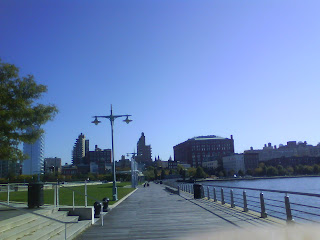 Saturday night, I watched my friend Karen Hildebrand read at the Three Rooms Press set at ArtZone461 San Francisco's Litcrawl before I got on a plane to her city, New York to play and generally get a kick in the ass re: inspiration & action. ArtZone461 is a couple doors down from Studio Valencia, where Karen and I had done a reading many years ago at one of the arts salons that Peter Whitehead then ran (Peter moved to New York a little more than a year ago where he's continuing to compose, & play). How many years ago we read @ Studio Valencia, I'm not sure. Less than 11, more than 5, as her reading reminded me that yes, it had been more than 10 since I'd returned to California, the same year Karen, who I'd known in Colorado, moved there. We all wrote, published, didn't publish, sang, didn't sing, were heart-full and heartbroken, had people die, dealt with it through writing & singing & studying, moved or didn't move, etc. et. al. The stuff of living. 11 years! How did that happen? And even more, it had been 20 years to the day since the Loma Prieta Earthquake. Within a year of that event, I was on my way to Colorado. No earthquakes of the natural world got me to NYC, though it certain is accruing it's share of memory space. ...These are the things you think about on a bright morning in New York, walking along the Hudson with your coffee, preparing for the next round. ...
Karen Hildebrand has a new /broadside, “Take a Shot at Love" available through Three Rooms Press: threeroomspress@mac.com
Posted by Bird in the Tree at 9:43 AM