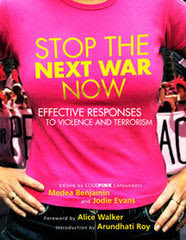 I did a wee bit of tabling on Sunday for Code Pink, the women-led grassroots peace & social justice movement, who were among the many exhibitors at the Green Festival. The Green Festival was a hall of good intentions. People sharing, selling and talking about raw food chocolate, organic cotton, co-housing, and green building materials crowded the Expo Center to its gills. It was groovy, it was inspiring, and it had its contradictions. Consumerism is consumerism, green or no, which isn't saying the Green Festival wasn't environmentally friendly, but true sustainability is a much deeper issue than wearing hemp.
A relatively slim corridor of Community Action exhibitors addressed many of these stickier aspects of humans attempting to live sustainably. Code Pink could be found in this area of the expo hall, and deep issues are what Code Pink, is about: stopping wars, respecting human rights, moving toward peace for all. What a tireless crew of women speaking out and finding creative ways to work toward a peaceable world! Perhaps a Pink Festival is needed? In the meantime, the CP site is a great resource.