Amid all the booking in previous months, Jean Mazzei and I came up with a handful of East Coast dates and the Great Idea Tour would go to Phoenixville, PA before Brooklyn. The town, we found out, was indeed named for the mythical bird, having risen from many steel-factory related fires. Hence the name of the venue as well, Steel City Coffeehouse. Phoenixville was exceedingly friendly and welcoming as has been Pennsylvania in general. Having never been there before, I decided to stay on in Philadelphia for a few days before heading to NYC & I've been totally taken in by a progressive, hip, accessible and environmentally savvy city. Most restaurants and cafes cater to vegans (the joke being that some places label things 'non-vegan' rather than the other way around), the subway/trolley system is easy to learn and the mayor, Michale Nutter is evidently dedicated to making Philly the most sustainable city in America and it shows. Composting, car-sharing, wide bike lines and bike-share program are in full evidence. I'm visiting during Earth Week so there seems to be Green celebrations on every corner... as well as flags, former home as it is to Ben Franklin, Betsy Ross & the rest of revolutionaries. Thus far, I've balanced out my viewing of of the Liberty Bell & Independence Hall with one of Philadelphia's Magic Garden, a crazy quilt block of mosaics by Isaiah Zagar. Likewise, the musical landscape is just as diverse: indie bands at Mill Creek Tavern, a smoking Latin Jazz jam at Cafe Clave & an impromptu house mini-concert at my host's place scratching some of its surface.... 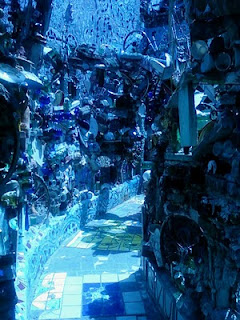 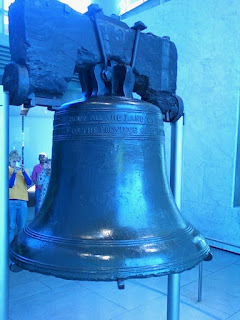 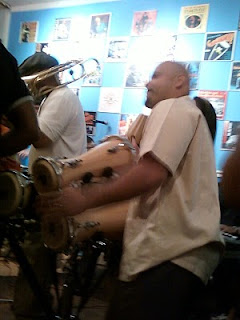