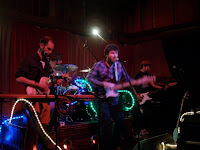 I first heard the music of Blisses B while on tour with a band that featured bass player James Touzel. James had also played bass on the the Blisses B's CD 'You Should' which he shared with the rest of the crew. Fronted by Noah Libby, the band's name alone got my interest, but the music kept it. Upbeat, with a strong vocal, the music is equal parts songwriterly, Americana, rock and jazz: B's describe themselves as "psychedelic folk rock." Libby and Blisses B have been hard at work on a new CD to be released this fall. As he prepped for some upcoming Bay Area gigs Libby discussed his approach to making music.
Q: First, let's start with the band name, Blisses B. How did you come up with it? What does it mean to you and the music?
NL: Blisses B is my nickname from childhood. My middle name is Benjamin and that's the B part of it, the Blisses is really simple...we were playing some sport in the street, as kids do on a constant basis, and I did something blissful and it stuck. Some friends still call me it to this day. Ultimately, I told myself when I started a musical venture I would call it Blisses B. I think the name harkens back to a time of youth and foresight, and I like that element. Our music benefits from this because our approach is similar in that we don't stray far from unforced creativity and imagination.

Q: Critics have cited your ability to cross over many genres? Can you talk about your influences? Who are you listening to now?
NL: We use traditional instruments (banjo, mandolin, guitars, et al) in very untraditional ways. That was never by design but more about ability and sound structures. ...Influences [are] what seeped in as a child. My Mom had a heavy dose of Cat Stevens, Bill Withers, James Taylor, etc. on the stereo. My Dad is a jazz and Big Band guy. I think these, along with two olders brothers (who would at times make me use my gift certificates to buy them something they wanted) with different tastes, really formed my sense of music as a young child. I am really excited about some local music here in the Bay Area and of course I tap into my LP collection of years of yore.

Q: Can you discuss your writing process? Do you write as a band or do you bring complete songs to the group?
NL: It's a blueprint that I bring to the guys at practice. I will work something out on the banjo, mandolin or guitar. We will start with a completed song of mine and flesh it out to fruition. Nick Testa (bass) and Ben Keegan (guitars, etc) both have lead singer quality voices so I am lucky to have them doing back up vocals [and] harmonies. Matt McBride (drums) has been with me since day one and his backbeat is always an anomaly of tasteful and fetching drumming. We are very vocal about what we are doing and if we don't like it we will say so. That goes for a complete song I may have written or a part one of us is attempting to hash out. In the end I am always pleased with what we come out of the woodshed with and I foresee some songs from both Ben and Nick in the very near future.

Q:What's coming up next for you? What can listeners expect in the next several months?

NL: We are playing locally in San Francisco on Friday September 17th at the Hotel Utah and Saturday September 18th at Aubergine in Sebastopol, CA. Southern Calfornia and the Pacific Northwest are destinations before the year is over too, as well as SXSW in Spring of 2010. Our new full length record will be out this fall, November to be exact. It is titled Thirty Days, Sixty Years.

Check out Blisses B at www.blissesb.com for more news and links to new music.