Despite my stated desire to stay a little put for a while, I found myself boarding another plane last week. Kwame's brother Kwab, who fronts the band Eugene Wendell & The Demon Rind, was opening for an artist of whom I've been a fan for a number of years Jesse Sykes. It seems I'm supposed to listen to as much rock and roll as possible these days. Thus the gods (and weather) found me flying to Seattle for a quick weekend of listening and taking in a bit of the Northwest. Stumptown Coffee was drunk, High 5 Pie was eaten and I even caught up with one of my Ashtanga/Mysorean kirtankars, Samia, who lives and creates in Seattle. Yeah for the global music & yoga network in action! Plus the rain of the previous month stopped before I got off the plane so the sun was in rare (for those parts) and full glory. Amid the many charms of the city, the motive for the visit transpired at The Tractor Tavern in Ballard. There, serious guitar-man & woman- ship ensued. Jesse was all congeniality at the merch booth but true to form, her dark, moody vibe predominated onstage to good effect. The thick guitars of her band The Sweet Hereafter as well as her haunting vocals continue to deepen and season. And Kwab's band was pure garage rock exuberance & irony. Check 'em all out why don't ya? 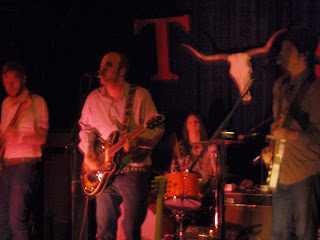