A bit of confusion over when the Jois Yoga workshop ended left me with an extra day in Los Angeles last week. Not to worry, I had a good excuse to practice more yoga and catch a show at the fabled McCabe's Guitar Shop. McCabe's has "The largest selection of stringed things to make music with in California." It's also hosted a whose-who of roots, folk & Americana musicians on it's 'backroom' stage during the past 50+ years  (a huge list including Mose Allison, Beck, The Bangles, Bruce Cockburn, Eliza Gilkyson, Emmylou Harris). Guitars, ukuleles, violins of every incarnation and age filled the walls. It was pretty jaw-dropping to be surrounded by so much musical possibility. The fine collection of instruments extended into the performance space (the host joking "if there's a fire, please grab a guitar of the wall and head for the nearest exit.") The stage room reminded me of the old Sweetwater Saloon crossed with the old Freight & Salvage, and provided a warm and  intimate, lets-see-how-it's-done setting for the audience.
Conveniently, the venerable show was located only a couple of miles from my host's home in Santa Monica (Minimal driving in LA is always a plus). And, not one, but two acts whose show I wanted to revisit were playing that night: Pieta Brown and Carrie Rodrigues. Both songwriters are well pedigreed roots-Americana musicians and were well-matched to tour together. Pieta is the daughter of Greg Brown and his influence was unmistakable. Her writing style was sweet, direct and real. Dressed in jeans and cap, with little make-up, she won us over with her pure authenticity, solid guitar playing and songs about growing up in rural Iowa. That said, her voice and singing style were equally evocative of Bob Dylan's as much as her father's. 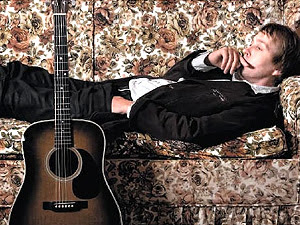 Rodrigues, a native of Austin, is also the daughter of a songwriter, David Rodrigues. She was discovered as a teenage violin student and went on to tour with Lucinda Williams, Chip Taylor & Escoveda. Now barely in her 30s (my guess), she's an impressive list of recording credits and a polished surety with her violin, mandobird and tenor guitar. Backed by a pedal steel player whose name I missed, her set was full of tales of the lovelorn, love-wronged and lovestruck including "She Ain't Me," and my fave of the night, "Got Your Name on It." She was suffering from a cold so her voice wasn't at full power but she soldiered through a solid set before inviting Pieta back up to sing a tune together.
Flash-forward a week, and I'm driving up to Petaluma with Kwame to see one of San Francisco's best guitarist-songwriters Chuck Prophet. Prophet has an impressive discography and a wicked way with a Fender guitar. He's also one of (my hero) Alejandro Escoveda's pals and co writers. Prophet—his second song of the night was"Always a Friend" from Escoveda's "Real Animal" (whose songs were all Escoveda/Prophet co-writes). Anyhow, the band just rocked overall. Prophet is truly a wizard with a guitar, and his bandmates, including notably Stephanie Finch (guitar/keys/vocals) and James Deprato (slide guitar) provided solid foils for his practiced musicianship. Prophet reached across his deep catalog for the set, doing "Monkey in the Middle," "Gone" and "You & Me, Baby (Holding On)." Likewise, he and DePrato did an impressive 'history of electric guitar' that drew on just about every well-known lick since the instrument was invented. Finch also sang a song from her recent, Prophet-produced CD "Cry Tomorrow" that showcased her strong yet sweet, vintage-country voice. Nice show.
Posted by Bird in the Tree at 10:11 AM

A good blog doing talking about music. I also like music very much. Maybe we should be friends? Then we could do some songs together. I am going to become a big rap star very soon, and maybe I could rap over some music that you do on the ukulele. A ukulele would suit me very well because I am Tinie Tempura. We could also become big stars in America together.