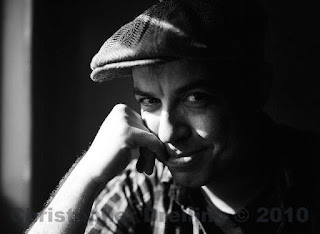 If you're looking for a tireless supporter of other songwriters, an instigator of events that shine the spotlight on San Francisco's wealth of talented troubadours, and an example of one of those voices, look no further than artist Jeff Desira.  An accomplished multi-instrumentalist who's played in a bunch of bands, Jeff's diverse musical background adds up to a knack for acoustic balladry laced with catchy hooks. I first met and heard Jeff  at one of Alex Jimenez's Usual Suspects Songwriter Showcase where I was glad to find he was in the thick of recording his recent material.  He recently caught me up on his new project, his influences, the showcase he now hosts, and his experience as a songwriter on the East and West coasts.

Q  You were in a lot of bands before turning your attention to the guitar and your solo work. Was that a difficult or easy transition and what do you love most about leading with your own music?
JD Before making songwriting on guitar my main focus, I played synthesizers and bass guitar in various band situations, starting from around 1990.
Transitioning from keyboard session work/playing keyboards in bands to bass wasn't so difficult for me, really. After auditioning for a band as a keyboardist, they admitted to really needing a bass guitarist and literally gave me my first bass: a 1954 Telecaster bass. I learned an 8-song set in about four weeks and we had our first gig. In hindsight, if I hadn't taken piano lessons first, I probably wouldn't have had a good understanding of how bass works. Bass is a much more physical instrument though, and requires a different kind of coordination. I ended up playing bass guitar from about 1991 to 2004, when I decided to start writing songs on acoustic guitar.
The transition from bass to acoustic guitar took a while longer, primarily because I was developing material on my own this time, and had a more intense focus on song arrangement.
I've been writing songs mainly on acoustic guitar for about nine years now, and I love that I get to incorporate all of the things I've picked up over the years and use it on my own recordings. For example, I'm currently recording an EP with producer/musician Scott Mickelson (Fat Opie) and now I play bass on my own tracks, sing backing vocals, write violin arrangements, play percussion — I can add anything I want as appropriate for the song.

Q  Music in SF, Music in NYC, Music in SF: Discuss. What's different and similar about the music scene in/of both regions?
JD  After playing in bands for about 14 years, I found myself writing songs on acoustic guitar for [another] three years. With the exception of an occasional open mic, I didn't really play out much. I then decided to move to New York where I think I really sort of developed my chops. In '07-'08 the singer-songwriter scene there was pretty thriving, and on pretty much any given night there was a place to play. All of a sudden I was surrounded by other songwriters who were working intensely on their own projects to a degree that I hadn't seen in SF. I know for a fact that it inspired a creative output in me to where I wrote a ton of material in a short period of time. I also think the level of appreciation for music and live performance is different there. I remember having a regular Thursday night gig at some infused-vodka place downtown, and the clients and staff treated me incredibly well. Everyone was really excited about hearing the live entertainment no matter where I was. I never felt that to them it was just ambient noise or that they were just putting up with it. I felt genuinely appreciated.
I eventually moved back to California in early '09. I literally moved straight from Brooklyn to the North Bay to take care of family and begin scratch tracks for my current EP with the late Kerry Garloff. During the process, Kerry admitted to me that he had cancer and insisted on finishing what we had started. Shortly after we finished recording the scratch tracks, Kerry passed away, leaving a message through his Mother asking me to finish my album. This is the album that I'm currently working on with producer Scott Mickelson.
After a couple years of hosting events and showcases, I finally moved back to SF where I found a new, developing singer-songwriter scene, comparable to what I had experienced in NYC. The level of appreciation for music here is still different from that of New York, but it's still so inspiring for me to be around so many talented and motivated artists with similar interests.

Q Other than your latest mixes, what/who are you listening to now? What have you heard lately that made you go 'yeahhh!'?
JD I love well-crafted songs and find new music often through the suggestion of friends. The last thing I heard that really blew my mind was from local musician Brad Brooks — a song called "Night Fades" from his album Harmony of Passing Light. I'm also listening to Fat Opie's "Victoryville," Felsen's "Breaking Up with Loneliness," and from Brooklyn, NY, I'm listening to Brandon Wilde's album "Hearts in Stereo." From Melbourne, Australia I'm listening to Tim Reid's "Any Given Day."  Also on my ipod right now are Tim Easton, The Jayhawks, M. Ward, Guster, Glen Phillips.... 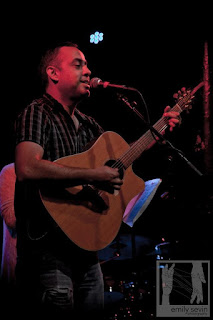 Q Tell us about SF Acoustic Sessions, your monthly songwriter showcase.
JD  I host a quarterly songwriter showcase, titled "SF Acoustic Sessions." I performed the very first one at 50 Mason Social House, but then I decided to simply host the showcase for other musicians and give them 100% of what's made from the event. The whole idea was inspired by a conversation I had with local musician Tom Rhodes about the use of the word "community." In order to have a community that works, you have to put in more than you get out of it. For this last showcase at Milk Bar, I hosted Chelsea Coleman, Jefferson Bergey, Aaron Ford, Tom Rhodes, and Liz Ryder.
My next big performance is at Lost Church in HSF. It's both a theater and live music venue here in San Francisco, where I've seen many incredibly talented musicians perform. I have a special full band performance planned for this show on July 25th, just two days before my birthday.

Q How can folks find out more about the Lost Church show and have you any touring on the horizon to support the EP?
JD An easy and quick way to find out about them is to either go to my Reverbnation page or Facebook fan page, where I post my performances regularly. As for touring to support my forthcoming EP which will be titled "Weathervane," I'm looking forward to touring up and down the West Coast, as well as parts of the East Coast after it's release in the coming months.