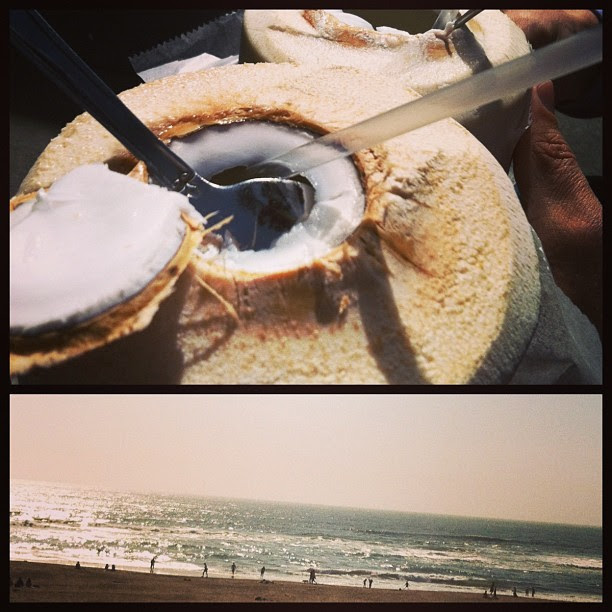 Kwame cleaned the car this week and within an hour of being vacuumed and buffed there was sand in both foot wells. Despite dipping toes in the water before leaving the beach and shaking out my shoes before getting into the car, I seem to always trail some home. There's sand on my yoga mat, sand on the front porch next to the front door, sand in foyer. I came home from my trip to Southern California with sand in my suitcase. I'm not complaining. I consider it a victory that my current lifestyle allows me to get to the beach most days, even if only for a few minutes of toes-in-sand, gazing-at-water time. Living near a bay side beach the past two years has been a revelation. Instead of crashing waves, you get wind-pulled tides and pulsing currents. We live inland enough to be out of  sea-level rise's way, close enough to get to the sand in five minutes. Getting out to water's edge seems necessary, in my DNA. Beach blood is very likely: My grandparents were from a fishing village on the Adriatic; my dad grew up in a house built on the sand dunes of San Francisco.
After a recording session last week, we drove out to the ocean-side of things, the avenues of the Sunset District. After so many years, I finally had written down the correct address of my grandparents former home. I couldn't remember where it was, but as soon as I saw its 1920s era stucco facade, I remembered childhood visits, sitting in my grandparents home, trips to Original Joe's and my dad's old baseball pennant flags. My dad used to tell stories of playing in the dunes behind the house, as well as the very new Golden Gate Park. It's a different world nearly a century later — the avenues leading to the beach are filled with similar tracts homes of that time as well as restaurants, coffee bars (mmm Trouble Coffee & Coconut Club) and surf stores, groceries and Muni lines — but as ever, the beach was the beach, always changing, always what it is. Which is likely the real reason I love it so much.
This isn't a new song, but it's surely one of the great ones: Sand & Water by Beth Nielsen Chapman