My ears went on high alert and I sat up a little straighter when I first heard Cosy Sheridan play at the Far-West Conference in Irvine last month. Playing impeccably wrought and heartfelt songs about everything from the wonders of learning to play your own guitar to the dangers lurking in the waters of a mining town, it was immediately clear why she was one of the conference's official showcasing artists. Of all the very fine music I heard that weekend,  her songs were exemplary... you know, songs with a capital S, songs that make you believe songs can change the world.  Plus she had that uncanny ability to make everyone in the audience feel as if she'd known you your whole life and knew exactly what type of song you wanted to hear. 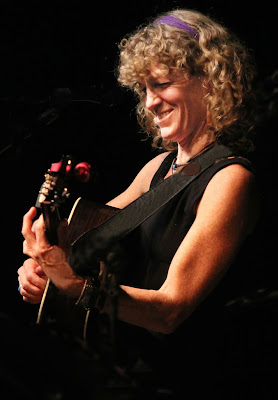 Of course, I was just late to the party. To date, Cosy has released more than 10 CDs of original music, founded a successful folk camp and toured a one-woman show to much acclaim. Wanting to get more up-to-speed, I asked Cosy some questions about her work as she wrapped up another successful songwriting camp in Moab, Utah.

Q: Tell us a little bit about early inspiration to be a writer & your writing process? Do you remember the first song you wrote?
CS: The first song I wrote was in junior high. I had a guitar teacher in Concord NH who encouraged me to try writing a song. So I wrote about how it would feel to walk through the doors in the doll house I had when I was younger.

Q: What first brought you to Utah and motivated you to make a home there?  Listening to you play 'Don't Go in the Water' reminded me of Ed Abbey and Terry Tempest Williams who love(d) the land there and have fought for it's protection. Can you talk about living in Moab and how the Southern Utah landscape and community influence your work. What is your thinking about writer-as-activist?
CS: I moved to Moab in 1994. I had been driving through there since the mid-80’s — I used to work in the Grand Canyon—I would sing in the Bright Angel Bar — in the summers and I would drive through Moab on the way there and back and I fell in love with the town, and with the southwest.
Living in Moab exposed me to the writers and artists of the southwest — like Ed Abbey and Terry Tempest Williams; “Desert Solitude” (Abbey) and “Refuge” (Tempest Williams) were two of the books that I read in my early years in Moab. They both taught me a lot.
I think the landscape of the southern Utah influenced my writing in a couple of ways. First, I found I had more time to write — large blocks of time — because there really wasn’t much work (concert venues) in the immediate area of Moab, so I would either be on tour, or I would be home. In New England it was more likely I would be working every weekend and so I wouldn’t ever get as quiet and introverted as I might in Moab.
As to writer-as-activist: I have found that if an issue effects me enough — if it really gets into my heart — than a song will arise from it. I don’t think of myself as the sort of writer who can choose a topic, though — and then write a song about it. The one exception might be “Don’t Go In The Water” — which I wrote on a run on along the Colorado River. There was a lot of discussion in town at that time about how to raise awareness on the issue of the uranium tailings pile. I really wanted to write a song to help — and that song appeared.

Q: Your song 'Air Guitar' details the great value to ones life in having a guitar.  Can you tell us about some of the teachers who have had the biggest influence on your playing?
CS: My biggest influence was my babysitter Patsy Niswander who taught me how to play guitar when I was 9. She taught me for probably 2-3 years. The next biggest influence was probably the musicians in Portsmouth, NH in and around Boston in the mid-80’s. I dropped out of Amherst College and moved to Portsmouth in 1984. Harvey Reid was one of my first roommates — he was a  Winfield national fingerpicking champion. I also took guitar lessons from Eric Schoenberg and Guy Van Duser — they both taught in the Boston area. (Eric now has a guitar shop in Marin County, CA.)
Eric is a seemless player — he is one of the early DADGAD pioneers in fingerstyle guitar; and Guy developed a way of transcribing stride piano pieces to the guitar. Sitting in a room with him was  overwhelming and yet inspiring. He did things no one really was doing at that time.

Q: Who were some of your earliest influences and is there any music/writer you're finding especially, or newly, exciting or inspiring right now?
CS: My earliest influences were probably my brother and sister’s record collections — Peter Paul &a Mary, Joni Mitchell, the Beatles. My strongest memory is of my brother putting the little headphones from his Walkman on my ears in about 2nd grade — and playing me Bonnie Raitt’s “Streetlights” album (on a cassette, of course).

— Cosy Sheridan "Don't Walk Away From Love"  from The Horse King

Q: From the looks of the curriculum, Moab Folk Camp seems to be among the more comprehensive songwriting camps around. How has this evolved and what's new this year (if anything)?
CS: Moab Folk Camp is 6 years old this year! The curriculum started out being mostly centered on songwriting, singing and guitar; over the years I have tried to add in other instruments and styles. This year we have banjo, ukelele, mandolin and percussion — as well as photography and painting. My all-time music camp hero is  Puget Sound Guitar Workshop up in Washington State. They have a remarkably comprehensive program — and a very supportive open-hearted approach. They are a much bigger camp, and they have three weeks of workshops — but whenever possible, I have tried to model our little camp on them.
I have to give a nod to my campers, though, for making Moab Folk Camp a success. They have returned year after year to help co-create this fabulous community of friends and musicians who spend a week together in a beautiful place — sharing and learning and filling up on Vitamin C (creativity).

Q: Gazing into the future a little bit, what can listeners expect over the next 6-12 months? Any big tours or recordings or?
CS: I just released a solo CD of songs that students have asked to learn over the years; there is a songbook coming out this winter with lead sheets and chord charts for each song.
I’m also working on a CD of new material that I hope to have out by the winter. It is tentatively titled “Lost & Found.”

Get the latest information about Cosy Sheridan's music, camps and shows at http://www.cosysheridan.com/
Posted by Bird in the Tree at 8:25 AM