Spring Forward: The Birds are Back in Town 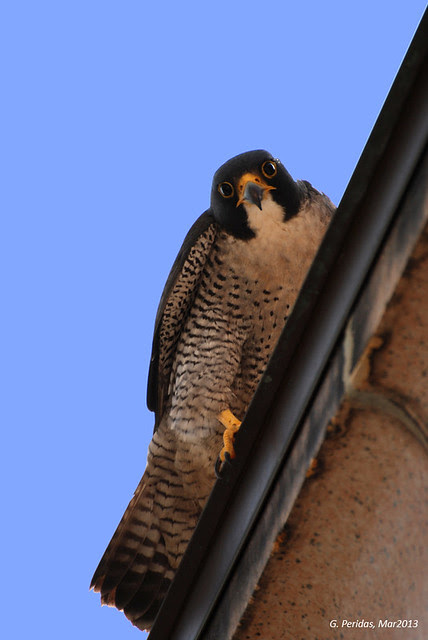 Driving into Alameda last week, we were pleased to see the local pair of peregrine falcons had resumed their posts at their bridge nest-site.  The annual falcon watch has heated up all over the Bay in recent weeks, as evidenced by the activity on  the WebCams the Santa Cruz Predatory Bird Research Group has installed to keep tabs on the activity of breeding pairs of the once-endangered birds in San Francisco and San Jose.  If you're interested in falcon courtship, breeding and fledging behavior, look no further.  Both SF and SJ pairs produced their first eggs during the past week, with more expected.
"The peregrine falcon is an important indicator species. Its carefully recorded population trends can be instructive about ecosystem health. We closely monitor the occupancy and productivity of peregrine falcons at approximately twenty-five nests in our Greater San Francisco Bay study area, and we band nestlings at a sample of those sites to learn more about the longevity, nest site tenacity, and juvenile dispersal patterns of Central California peregrine falcons. Citizen scientists around the bay report sightings of banded falcons."
Posted by Bird in the Tree at 7:28 AM