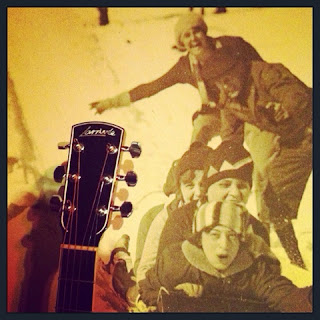 Summer is over. I know that's a ridiculous statement in late October, but this past week I really felt it. In part, because I was in the mountains, in Truckee, for a gig and a night, at elevation. There, at close to the 6,000 ft, the temperature dips to freezing and below most nights, and the aspen trees have long since changed color, and I remembered, duh,  seasons. "The shoulder season" our host, a long-time resident called this weekend, between the bright summer when mountain bikes and hikers head for the trails and the snow-filled, skier-drawing winter. Still the bars were full, and while the thin air called for slightly different singing strategies (mainly a lot more water),  I felt the history of mountain living in my skin, camping in the Sierra, waking up to icicles dripping from the eaves in Boulder, and felt placed. I don't know I'll ever call a mountain town home long-term again, but there is nothing like the clear signifier of weather on lifestyle that comes with high elevation and its atmospheric changeability.
Fortunately, for my personal need for a sense of seasons and place, and more importantly for the California water-table, it rained twice, at home, at sea level, over the course of five days. We saw fit to relight the pilot light and I've made like a bear for a couple days of long naps, extended sleep, and actual book reading.
Read: Tracks, by Robyn Davidson. When I was a kid, I lived for the arrival of certain periodicals, especially the pink section of the SF Chronicle and the monthly delivery of National Geographic magazine. It's hard to imagine one news source having such an impact in this day of everything-at-your-fingertips, but National Geographic was formative for me: articles on Egypt and bird migration and native peoples of countries whose names I couldn't pronounce. One issue included an article about a woman who crossed the Australian desert, alone save for several camels. I was mesmerized by the pictures of her riding the animals, encrusted with flies, drinking out of streams and finally, reaching and wading into the Indian ocean. I think I read that article again and again, and then...forgot about it. Last week, a fellow-hawk watcher told me the story had been made into a movie. Instead of going to the theater, I bought the book and have been feeling like that National Geo-reading kid again.
Eat: Chances are I was eating a grilled cheese sandwich made with white bread, cheddar and lots of butter while I was reading those National Geographics. This many years later, I rarely east dairy or bread, but that doesn't mean the charms and comfort of grilled cheese have been lost to me. I ordered such a sandwich after a gig recently and nearly swooned from pleasure.  It wasn't vegan or gluten free but this one is: Basil Butternut Grilled Cheese. OMG!

Listen: Really enjoying what I'm hearing from Frazey Ford's latest "Indian Ocean." Recorded in Memphis with Al Green’s band, The Hi Rhythm Section, at her back, its makes for another sumptuous, if aural, feast.

Al Green’s band, The Hi Rhythm Section
Posted by Bird in the Tree at 8:00 AM

I really enjoy reading your posts, especially the read, eat and listen themed ones. Curious do recall how young you were when you started 'reading' Nat Geo?

Not sure how old I was. We always had it around. Even before I could read, I remember being pretty taken with the photos.