Hawaii Postcard: Wherever you go...

I said to myself, I have things in my head that are not like what anyone has taught me - shapes and ideas so near to me - so natural to my way of being and thinking that it hasn't occurred to me to put them down.
Georgia O'Keeffe 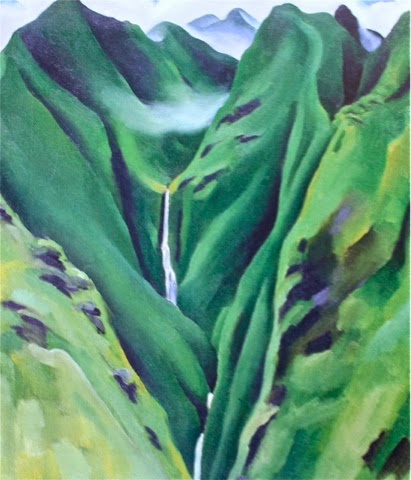 Wherever you go, there you are....it was fun to happen upon several paintings by Georgia O'Keefe at the Honolulu Art Museum this week. The Dole Company paid for O'Keefe to fly here in 1939 in exchange for two paintings (on any subject) they could use in their pineapple juice ads. She produced 20 paintings inspired by her time in the island landscape, and the three I saw were lovely and so immediately recognizable as her work. Even though Hawaii is 180 degrees different than New York, where she was living, and Santa Fe, where she settled. It reminded me what I've been feeling this latest bit of travel, and what I've learned in the past: wherever you go there you are
For a long time, my urge to travel was to get away. But my need to escape myself was cured  by my last trip to India. Both knees injured, yoga practice compromised (physically), far from my love, I felt finally a big 'uncle' in me. Realizing once and for all, I was not going to transmogrify into a fantasy of myself that had it all together and was pain (physical, emotional, you name it) free. No I was me, that wasn't going to change fundamentally, this lifetime. So when I came home, I really came home, and started to put down roots for the first time in years. I've travelled a little in the past three years, but it's been pretty west-coast centric, road-trippy and domestic.

So flying to Hawaii this week was the longest I've been on a plane in a bit. Still it felt pretty natural and familiar and I arrived curious for perspective rather than looking for escape.  Flying out over the Bay Area, getting a clear picture of my home territory: the small island of Alameda we call home, the vast, bridge- becrossed San Francisco Bay as well as Hawk Hill in the Marin Headlands, and Pt. Reyes jutting out furthest west fromthe mainland as if it wanted to go to Hawaii, too, was the literal broad overview. And being here has been a balm and extension of that. It's been great to mostly unplug and not do too much -- not try to see everything, everywhere, or play out or what have you, going to the yoga studio in the a.m., writing and strumming a little, albeit augmented by warm water, acai bowls and sand. Mm mm Mmmmm. 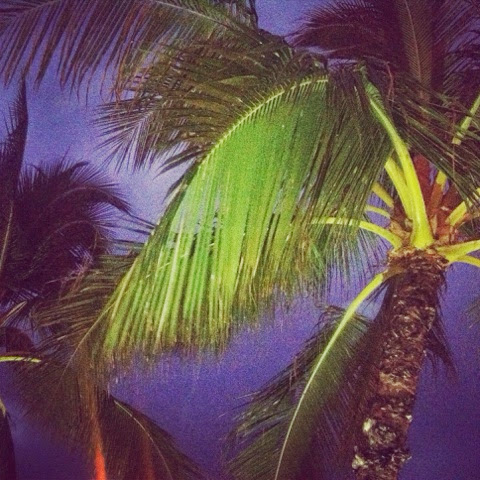