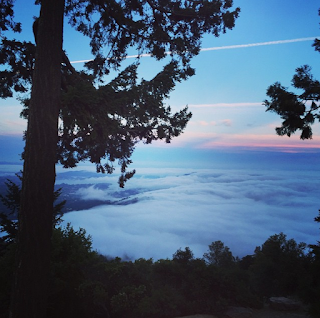 In addition to mornings, views are one of my favorite things about life. Sometimes, I think I live for the long view: the broad expanse of sea and sky from a high mountaintop, the sweeping view of the East Bay from the 980 when you come off the Bay Bridge, the seemingly endless terrain of desert in the Mojave. There's no question, no answer, just that. A couple of weeks ago, we were up on Mt. Tam to play the Father's Day brunch and everything suddenly made sense again.
Of course a high wouldn't be a high without a low. The tides of peaks and valleys, dark and light go in and out, and I followed up that weekend with a few days holed away, looking back, while scanning a genealogy book my great-aunt put together. My aunt had chronicled six generations on my father's side, before passing away in 1998, and the book has languished on various relatives shelves til getting to my hands a couple of years ago. I don't know what finally clicked, but I finally turned toward it, and began the process of archiving her materials. I was struck, as I went through each page, by how much detail she had amassed pre-Internet,  and how much of the story of my family is a tide running back and forth between fighting wars and going back to the land to farm/ranch/homestead, inching East to Wests, with stops in the South and in the Rockies, and finally to California, over a couple of centuries. There are also many gaps and question marks about particular characters in this narrative – where did the great-grandfather get to between St. Louis and Oakland? Who was my aunt's first husband? Questions, questions. Suddenly I'm back in the fog.
Read:  And so All The Wild That Remains: Edward Abbey, Wallace Stegner, and the American West by David Gessner feels like a friend this week, detailing the lives of two authors/activist I read avidly while in college, while traveling much of the terrain I knew well when I lived in Boulder, asking questions about motive and character, our relationship to land and our seemingly inevitable exploitation of its resources.
Eat: Mint and summer just go together and throwing a bunch of fresh mint into a salad can be especially satisfying: "Kale/Tomato/Feta/Mint Salad"
Listen:Veruca Salt is back at it after a long break from recording.