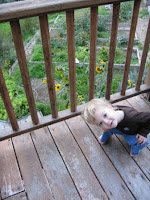 Explaining Amma to my fellow diners on Thanksgiving while carving the turkey (drawing on my college ornithology and taxonomy classes, I volunteered to do this though I no longer eat turkey) and again, this morning, over coffee at Cafe La Vie, made me appreciate anew the twists and turns of the past (near) decade. I returned to California nine years ago, mostly to tie up loose ends up with my parents who would both come to pass in subsequent years. I also started writing for the Pacific Sun (where I met editor/writer Mat whose Thanksgiving feast I took part in yesterday), and practicing yoga, where I first heard about Amma. Amma is a spiritual leader in the tradition of Gandhi or Mother Teresa, a tireless activist for peace and compassion, who is known as the "hugging saint." Yes, it's that simple. She hugs people. All sorts of people from every walk of life, in any state of being. And if you've received an Amma hug, you know it's one of the best, love filled, healing hugs you'll ever get. Amma's tireless activism has resulted in a huge amount of humanitarian work (tsunami recover, orphanages, etc). When she tours in her native India, she is mobbed. The center was crowded yesterday for day one of the public darshan services with people from all over the Bay Area and beyond (The woman who gave us a ride up the hill to the MA center had driven up from San Diego the previous night). Nonetheless, there wasn't any mobbing and it was a very cheerful and peaceable gathering. We were able to get in line for darshan within two hours of our arrival. I've done this perhaps five or six times in the past nine years (once in NYC, not at all in India, 4 or so times here in CA) and I count myself very, very fortunate for it.
"Seeds of knowlege," a fellow yoga student explained in India, when I was there in 2004. "These teachers give us bits of wisdom so we can take it out in the world." The latest visit to Amma's served as a reminder, that, no matter what you're doing, it's all above love and compassion...and acting on that knowledge.
Speaking of love, Sally sends a photo of the oh-so-joyful Leo, who I'd like to officially adopt as a god-nephew. I've a song about him though I haven't figured out how to upload mp3s to this blog...yet...
Posted by Bird in the Tree at 11:43 AM

How smart of you to figure out the mp3 thing! Facebook app, I see. One of these days, I'll get to that.