...media, not type. The amount of media options these days can be daunting. Another songwriter tipped me off to Reverbnation-hence, I 've now got some of my tunes on this page. I've done a number of different recording projects over that past five years and the current selection of songs cover several of those bases:
1) Cafe La Vie, produced by Ben Bernstein, on upcoming ep "Turn It All Red" (2005)
2) The More I Know, co-written with and produced by B.Z. Lewis (2005)
3) Dream Me, co-written with Tim Salz 0n "5 Acres" (2003) produced by Roberta Donnay

This is a photo from a past gig at the Nomad Cafe. 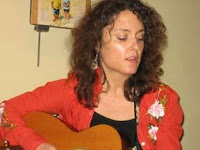