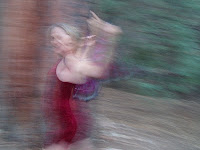 I met Liz Bucy many years a go during a bike race in the Rocky Mountains. I was having what would be my best season while Liz was just returning to cycling and we somehow connected mid-pack. High on endorphins, we 'cooled down' by pedaling up Vail Pass chatting about it all and a friendship was born. Over the next several years, which saw Liz go pro and me concentrate more on my writing, I learned that in addition to being a great athlete, she was a true artist. A Francophile with a love of music and a background in ballet, Liz possesses a unique and clear aesthetic that combines old Europe with movement, beauty and decay. Now living in Santa Fe where she maintains a bodywork practice, I caught up with her as she prepared to make a movie based on a bicycle ballet of Giselle over Halloween weekend.

Q: Has anyone done a bicycle ballet before? How do you go about choreography and how does your early training in dance & years as a bike racer come into play?
LB: I've found some clips of people doing bicycle ballets [which] gave me lots of good ideas. This is going to be a bicycle ballet — each character will have a bicycle and everyone will do a very loosely defined form of ballet. Actually, what I hope will happen is that the inner ballerina in everyone will just manifest in all-out biker goofiness. Oh, but wait, Giselle is really melodramatically serious. But since it is in B/W, I think it will all be perfect.
Some ideas I have for 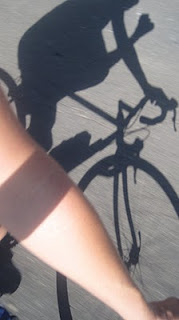 choreography are slightly elevated views of the dancer/bikers doing a couple things in formation — zig-zagging around the cemetery, doing floral patterns, sunbursts patterns... The main idea I have is for Giselle to go down with a broken part (omg, i meant heart! Freudian bicycle stuff!!) , spiraling away from her bike but not letting go until they both meet the ground and are at rest in a beautiful curvy "S" shape. ... stunning!
As far as my bike racing years coming into play here, I think that my joy of riding came from the days where I felt like I was simply flying, and "dansant sur les pedales," which happens when you are out of the saddle a lot, climbing hills, using your entire body, upper and lower, and there is a real sense of grace. To give a dancer wheels is to create magic. It just seems natural to me that bikes and ballet should be together.
Q: What films are you looking to for inspiration? Would you count anyone or thing as an inspiration for the piece?
LB: Hmm... somebody told me that I should watch the modern day Romeo and Juliet to get the sense of anachrony. I have not yet seen it. It's great because things people post on Facebook sometimes help me —I have started noticing details in other films lately and storing them in the vault for the filming [coming up].
As far as counting anyone or thing as an inspiration for the piece... My friend Trice comes to mind. He is the person who got me into bike racing when I was 16. We trained together and did our first race together (in which we got dropped at the starting gun, rode a few miles and then turned around laughing cause we were kinda tired anyway!). Trice got killed on his bike when we were just going into our senior year in high school... I might have been predestined to the slightly morbid side of things anyway, but after that, October has always been challenging and slightly heart-breaking for me. Death, bicycles, beauty... grace and feeling the spirits of people you've known all around, still talking to you and with you. Wheels spinning... Giselle really is tragic because for one, all the bad shit happened because of a misunderstanding on her part... But also tragic because love just found has become love lost almost instantly. The finality of death is heart-wrenching, but then the magic that can continue between souls is deeply inspiring, even if we don't get the earthly creature comfort of that person anymore.

Q: What other artists/musicians have been feeding your muse of late?
LB: Tori Amos is always inspiring. Today, her rockin song Lady in Blue is with me... my housemate and I just synced up our iTunes last night and so I am totally totally psyched to have an entire new music library with lots of Cure on it!! I lost all my vinyl Cure, so I am really really content today. Music is so important. I have also recently been listening to a local group's CD — they are called Medjool and are Santa Feans. Great gypsy-type music. One of there songs, I have visions of people stomping and dancing, a sweet riot — maybe I can use that in Giselle for the happy times scene with the campy teenage villagers! we'll see.... I've also been really taken by Lhasa de Sela's music lately. A friend posted a really cool video of hers and I was completely mesmerized. I went to sleep that night feeling completely electrified, content and so excited that I’d had the good fortune to discover this woman and her music that touched me so deeply!! I woke up early the next day and Googled her immediately to find... that she had passed away eight months earlier on new year's eve after fighting breast cancer. She was only like 40 years old. This affected me dramatically. It's all in keeping with the Giselle thing — love found and lost pretty much immediately. I have been listening to her a lot since then and though I’m sad that she's not really on the planet anymore, I have learned a ton from her. If you don't know her, check her out!! C'est sublime...

Q: Why Giselle? & why shoot on Halloween/Day of the Dead?
LB: To film a B & W bicycle ballet of Giselle... I wish I could remember when this first came to me. In 2001, when my son was one year old, my then-husband and I had moved to Carlsbad, NM, to open a bakery and cafe. I think it was there that the idea came to me, in October. I had a Super 8 Camera and loved to shoot film. We got a lot of folks together and went up on the one hill in Carlsbad one beautiful fall evening in the Chihuahuan Desert and filmed Giselle. It was an other-worldly sight, all these ghostly figures running around with cactus and a setting sun... amazing images. But unfortunately, that was not to be. My sweet little toddler had pulled the Super 8 off the shelf one day and it took a tumble, but seemed all right. It sounded all right and all the lights were working... the film was engaged... but when the people in Hollywood sent it back and said there was nothing on there, I knew the camera was malfunctioning. Good thing some people took pictures of the filming!! That's all we got. So in two weeks, this will be 'Giselle: Take Two.'
Halloween, All Souls Day, and Day of the Dead is the time when the veil is temporarily lifted between our physical world and the world of those who've gone before. Connection with those who've gone before is easier and stronger, just as it still is during the weeks and months right after someone dies. And that is what Giselle is about — the prince goes to the cemetery the night she is buried and spends all night fighting the Willis and the Queen of the Dead so he can have a few more precious moments with Giselle before the sun comes up and she is gone to the other side. Well, actually, that is implied. We don't really know if the prince kept going back night after night, month after month, year after year... He could have had that connection with her....
Q: Where would you like the film to go post-production?
LB: I have never made a movie before, so I am starting with this, a short film, probably 5-10 minute silent film...[maybe]... a short film festival! Facebook, most definitely — I understand its technology, it's easy!... But really, my dream would be to take it to Marfa, TX, if they have a short film category. I drove through there last May and it was neato.

Giselle: The Bicycle Ballet films Oct. 31 in Santa Fe. For more information, contact Liz @ ebucy@yahoo.com
Posted by Bird in the Tree at 10:19 AM