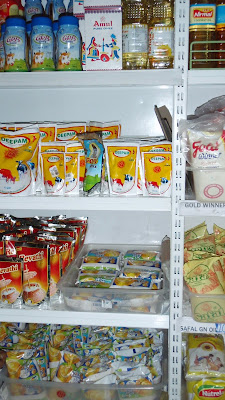 In third grade, Mr. Unruh, the teacher who we then called a hippie due to his beard and propensity for wearing plaid, filled a jar with cream, screwed on the lid and passed it around the classroom. The jar passed from child to child, who each gave it a good few minutes of shaking before passing it on. Shaken and shaken again, the liquid began to thicken, congeal, and form a hard, irregular lump of fresh butter that we then put on the whole-wheat pancakes Mr. Unruh was cooking up for us. The butter making and classroom-prepared breakfast was a demonstration of measurement, solids and liquids, cause and affect that fed our hunger on several levels. It was the first time I realized butter came from cream, and thus probably cows, having made it that far without questioning the source of the bright yellow cubes that came in a box in the refrigerator.
At that age, I happily spread butter on toast, English muffins, and white rice. I liked pale foods, filled with starch, a once typical American diet I’ve been undoing for 20 years.
While in India, I spread clarified butter, ghee, on crumbly millet bread made by a local who sits outside the yoga studio with a bin full of modern, health conscious and often hard-to-find-while-in-India Western food: raw honey, tahini, soy milk, wheat bread, tofu.
Butter seems a silly option in the land of ghee, and it's not uncommon. But when given a choice, here I choose ghee. It tastes great, and the Ayurvedic approach to health certainly finds many applications for ghee. But I eat ghee as much as a symbol of the possibility for ever-increasing clarity that something free of solids and less apt to burn, holds. I might even have become a person of whom my remembered version of Mr Unruh would approve.
Posted by Bird in the Tree at 8:39 PM