Mysore: For the Birds

The beauty of waking up inordinately early is that you see things you would otherwise miss: I routinely scare bats from trees putting my mat out to dry after practice and one morning, walking home, I looked up to see a flock of ibis. I was reminded, via the latest Michael Ondaatje novel The Cat's Table, (which I finished in 3 days last week), that if you're in the desert and thirsty, look to see which way the birds are flying to find water. No, I'm not in the desert, but still— 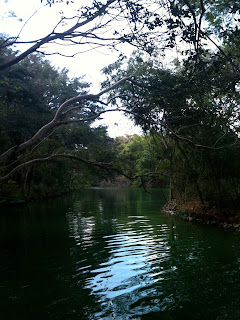 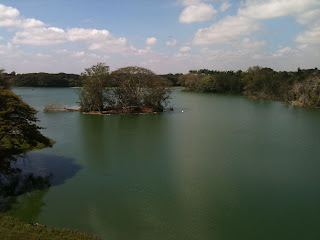 The ibis were most certainly flying toward the lakes of the city. There are three lakes of note in Mysore: Karanji, Kukkaranahalli Lake, and Lingabudi Lake. Kukkarnahalli, near Mysore University has been a favorite lake to walk around on previous visits. Some people go their to run and it's also a nice place to see birds. I've yet to get there this trip and three different people have told me it's been closed due to... cheetah sightings! How cool is that? I'd love to see a cheetah, albeit I'd rather not be killed by one. And I always kind of laugh at big cat warnings — in Boulder, popular park trails were often closed after mountain lion sightings, and Berkeley has its share of cats prowling through town — not because I don't think they're of real danger, but they're probably always around. It's just when someone sees them they're threat becomes more potent. Kukkaranahalli Lake also has crocodiles so it's clearly a lot more wild and wooly than it appears.
Saturday, I noticed a sign for a Bird Sanctuary while driving through town so Sunday led to the entrance of the Karanji Lake, on the outskirts of Mysore, not far from the zoo or the new, open-but-still-being-constructed Mega Mall. Karanji Lake is the centerpiece of the Sanctuary's action and there we saw the aforementioned ibis in a tree as well as herons, egrets, bee-eaters, eagles, peacocks, the Indian equivalent of a bittern, ducks, cormorants,  and fish. It was lovely, even if, as foreigners, our entrance fee was doubled and a tariff was placed on cameras. So be it. It felt for a few hours we were far from the city.
Posted by Bird in the Tree at 7:31 PM