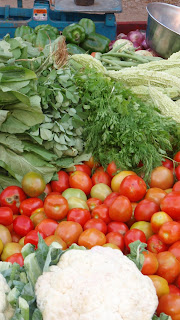 One of the charms of temporary Indian living is the vendors who stroll through neighborhood streets selling fruit, vegetables, housewares, you name it. Their presence is preceded by a vocal call of what they're selling, mostly indecipherable to my ear. But it's fun (and to me, novel) to walk out my door to see what's on sale. And often it's a bunch of vegetables whose names I've yet to learn. But yesterday, I rounded the corner for home and a man held out a handful of red grapes in one hand a plastic box of ...strawberries in the other. I blinked. Was I back at home in California? (CA grows 90% of strawberries grown in the US and I was born in Watsonville where a huge percentage of that 90% is grown).
"Where are they grown?" I asked the vendor, surprised.
"Bangalore," he said.
Evidently, strawberries can be grown nearly anywhere in the world.
But where they organic? He shrugged.
I didn't buy any strawberries in India, and I likely won't.  There are two things I avoid as much as I consciously can in the US that I can't get away from here: plastic and pesticides. There's no shortage of produce being sold in Mysore, recognizable to my eye (cauliflower, carrots, potatoes) and some fairly unique-to-India (drumstick, lady finger, bitter gourd). India is evidently the largest grower of vegetables after China, but a study found 50-70% of those vegetables are contaminated with pesticides. DDT — outlawed since 1972 in the US due to its harmful effects — and other internationally banned pesticides are often detected. And the challenge to growers according to the India Times is not so much not using pesticides, but ensuring that farmers don't use more than the permissible amount.
One word: Yikes!
The good news is that there is an interest in organic food here, too, albeit lagging far behind the consciousness and easy access to be found at home in the States. There are a number of organic markets in Bangalore, but only one store and one weekly green market in Mysore.
I urge you to seek them out!
Posted by Bird in the Tree at 5:47 PM