Middles of the Road, Silk & Paved

Welcome to America. While shopping at Whole Foods Oakland Saturday, I was momentarily distracted by the site of a man doing yoga in the middle of the crosswalk at the intersection outside the store. Wearing black shorts, a black tank top and headphones, he had his mat sprawled out on a meridian. A few sun salutations, child's pose, sideways planks.  He wasn't really flowing and I wondered what was the point. Maybe someone dared him? Or he was making a statement ('yoga instead of shopping?') or trying to sell classes ('take my classes'). But he didnt' look particularly yogic. He looked cold and uncomfortable. I stopped watching and he was gone before I finished shopping.

A night earlier, I couldn't take my eyes off Abigail Washburn who was opening the show for The Jayhawks at the Fillmore in San Francisco. Wielding three different banjos of varying sizes and backed by Kai Welch on guitar, keys and trumpet, she had a commanding confident voice and a style that transcended folk. Both she and her band mate looked like they'd just woken up (mid-set they copped to driving through the night to get to San Francisco), but were in full command of their instruments, playing a rich, varied set of a brand of music that was alternately jazzy, folk-based, bluesy or simply raw. Washburn has spent years in China studying the language and building ties that have led her to tour the country's farthest reaches.  She and Welch along with several other band mates very recently completed a tour along China's old Silk Road on a music and cultural exchange and the experience seems to have burnished them to a that-much-higher gloss of entertaining excellence. She brought the not-yet-formed or focused crowd together on an off-mic version of Keys to the Kingdom in which she and Welch went off-mic, tip-toed to the edge of the very stage to lead us in a sing along. I was thoroughly impressed. 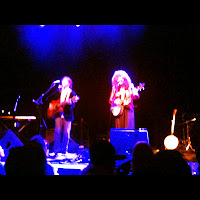 The Jayhawks were equally tight if more rocking and nonchalant (and maybe slightly bored) by their own high level of competence. They burned through a set of old favorites and tunes from their latest 'Mockingbird Time' with an almost been-there done-that air about them. After Abigail's small bonfire of a performance, I was both impressed and a bit underwhelmed.
Posted by Bird in the Tree at 5:10 PM