I perpetually think I'm about 14 years old. Then I look in the mirror or see someone half my age and go, oh yeah. Other than the surprises of the mirror, I'm generally liking getting older. Wisdom accrues over time, and, while I've plenty left to learn, I certainly don't miss the heights of my ignorance.  My latest birthday last week didn't mark a particularly big milestone, but it still marked another year of living and provided a reason to do something, however simple, in commemoration.
Amid the discussion about how and when to get together and celebrate, my sister said she had a ticket to iFly, an indoor skydiving 'experience.' Would I like to go? Well sure, I said, more because it sounded like a silly and fun way to spend some time with my family than something I'd been longing to try.
Many years ago, not long after I'd stopped racing bikes and soon after I had started doing Ashtanga yoga, I was assigned to write a story about skydiving. Part of the reportage entailed taking a jump (albeit tandem) out of a plane. I willingly signed on, not even thinking to say no (The editor told me she thought I was the only one of her writers who would take the assignment).  My yoga teachers at the time visibly shuddered in response to my telling them what I was going to do. This surprised me: these yogis were seemingly fearless in their practice and teaching.
Days later, when the small plane ferried me and my instructor to a suitable height above the flattest parts of Sonoma County for diving, I was more excited than anything else. And after the jump, 'let's do it again' was my immediate response. My reaction was tempered by the fact that skydiving is hardly a cheap pursuit. So leaping out of planes would not be a big player on my path to realization. Instead, yoga became a regular part of, and guide to, living my life. And to my surprise, despite my competitive and adrenalized past, yoga would be the activity that showed me just how scared I was (and am!) so much of the time. A lot of my outward 'fearlessness,' I learned, was simply recklessness, a very large distinction. As such, I didn't think of skydiving much after filing my story. 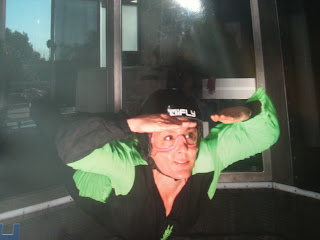 Now, an indoor flying experience is about my speed. There are no planes in evidence outside the iFly facilities in Union City.  Instead, there is a wind tunnel not so far from the highway. And flight instructors. And a wide variety of people — children, mothers, 18-year-old twins, dive junkies— to take a go at flying. iFlying is real life flying without having to take a big jump or a chance at its very real consequences. In fact, a surprising number of professionals and military personnel come to iFly to practice for actual jumps. We watched as one man in camouflage negotiated the airspace while wearing a large pack on his back and between his legs. God only knew what war-torn country he might be jumping into in the future.
Soon enough, it was our turn to lean forward into the tunnel and be caught (with the help of an instructor) by the updraft. After two 'jumps' (or leans), I didn't really have a hang of flying, but I had an idea of a sense of how my limbs effected movement in space of this kind. It wasn't unlike learning to swim. Afterward, we felt buoyed and energized.  It was fun. And funny. And like most things, yoga included, it took some faith, and some action, and some focus to do.
Posted by Bird in the Tree at 10:32 AM