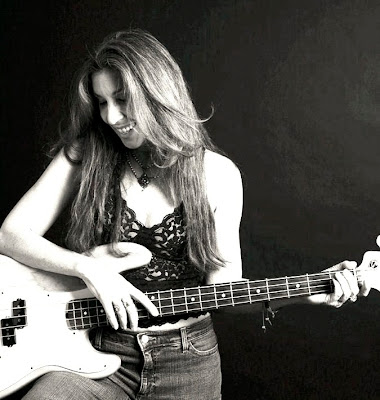 Sharing a love of many of the same songwriters (such as Lucinda Williams,  Emmylou Harris, etc) it was inevitable that I eventually meet fellow East Bay songwriter Kate Burkart. Playing her own personal brand of Americana, I was impressed by both her approach to lyrics and the fact that she plays bass and sings at the same time. As well as performing and recording her own material, Kate is also the founder and host of the popular Under the Covers music series which gives 3 (mostly) local artists a chance to interpret the work of 3 other musicians.  Leading up to the next Under the Covers show on April 21, which I'm happy to play, I asked Kate about her music:
Q: You're that rare combination of bass player and singer. How did you first pick up the bass? Does it feel natural to compose on it?
KB: I first picked up the bass when I was singing in a band where we always seemed to be losing either the drummer or the bassist — one day, my band mate commented on how much easier life would be if I played either of those instruments. So I rented a bass and showed up for the next rehearsal saying "OK, what now?” I didn't even know how to hold it, I didn't play guitar... Somehow I just kind of took to it, and started playing gigs soon after. Singing and playing felt natural to me, maybe that's why composing on it feels natural as well. I always focus on the rhythm of a song as I'm writing lyrics.

Q: Can you discuss your writing process.... Are you a disciplined, regular writer or do you wait for inspiration to strike? Do you write solo or co-write?
KB: I write solo, usually when inspiration strikes. Although, once a song's framework is there, I'm pretty disciplined about going back to it until it feels finished. I should add that I have collaborated on songwriting, and loved it — I'm a good partner for anyone who's suffering from writer's block!

Q: How did you come up with the idea for Under the Covers?
KB: I know so many musicians who, like myself, are passionate about other songwriters. I just had this brainstorm one night about giving everyone a chance to share a whole evening of covering the music of someone else. The name seemed like a natural fit, and the support — and talent — we've gotten has been amazing. We've also been lucky in finding a beautiful, non-profit venue with great sound: The Subterranean ArtHouse in Berkeley. 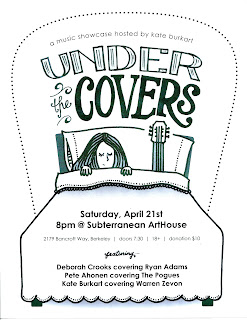 Q: How did you select your current artist to cover? What do you look for in a song? Any new discoveries happening as you prepare for the upcoming show?
KB: I don't always play and host the evening, sometimes I just host, since it takes a lot of time and organization. But I've got a long list of admired songwriters, usually they're telling a story, and their songs feel heartfelt and authentic to me. I don't necessarily choose mainstream artists, and have covered Blaze Foley, Mary Gauthier, Richard Thompson, and Lucinda Williams.
There are always surprises and learning experiences in deconstructing another writer's work — it can difficult but inspiring. I've always been a fan of Warren Zevon, and in going over his songs for this upcoming show, I discovered a song I'd never heard, and now it's a huge favorite. Part of the challenge is making it your own, and I love hearing the interpretations created by the talented musicians we been lucky enough to have perform.
The next Under the Covers showcase is Saturday, April 21, 2012 @ The Subterranean ArtHouse, 8pm $10.  2179 Bancroft Way  Berkeley, CA 94704 http://subterraneanarthouse.org/
For more information about Kate Burkart visit http://kateburkart.com/