It's getting to be spring and I've been wanting to get outside as much as possible. Yesterday, we drove out to Ocean Beach at day's end and could barely stand the force of the air being blown off the seashore. Oh my god how the wind was blowing.  No one was surfing. The shorebirds were having a hard time holding their ground. I covered my face to keep the sand out of my eyes.
Evidently, erosion is a big problem at the beach. I woke up this morning to an article in SFGate regarding climate change and its effect on the beach as well as the city's plan to stave it off.
"The 3.5-mile shore that lines the city's western edge draws more than 300,000 visitors annually. More shrouded in fog than in sun, it is not a postcard-perfect stretch of sand. But its condition has worsened for years as waves - heightened by climate change - hammer at bluffs, parking lots and the Great Highway." Read more: http://www.sfgate.com/cgi-bin/article.cgi?f=/c/a/2012/04/05/BAAH1NROHM.DTL#ixzz1rHT2VD7y

On a personal note, I've got a bunch of family history around Ocean Beach  — my dad grew up in the Avenues— which prompted discussion about whether he surfed. He did not to my knowledge, growing up during WWII and enlisting to fight as soon as he graduated high school. I didn't know if anyone was surfing Ocean Beach during that time..and it turns out, no one really knows. According to Ocean Beach Bulletin, most surfing there was documented post-war: "According to longtime Kelly’s Cove denizens, board surfing started on Ocean Beach after World War II...." though there remains debate about earlier, undocumented wave riders. 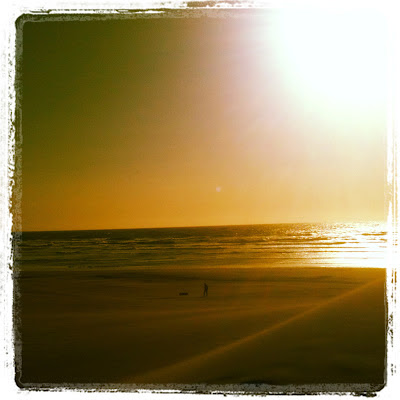 It was bracing to be on the beach like this but we couldn't stand it for long and drove home under a fat waxing moon. Today's full moon is April's "Full Pink Moon." From the Old Farmer's Almanac: